Weapon of the Week and a personal story 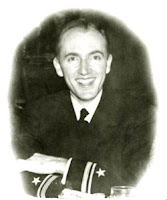 Last week I received some sad news. My great uncle, Fred F. Patten died Wednesday. Truthfully, because of our broken family, I didn't know him very well. I had only met him twice that I can remember, but those two events are forever planted among my happy memories. You see, not only was my great uncle a charming, intelligent and kind-hearted man, but he also had a fascinating life story. In 1934, when he was in his early twenties, he received a devastating phone call that his brother, his only brother had died in a plane crash. His brother, Robert Patten was my Mother's father and after graduating from the Naval Academy he'd become a navy pilot. He was performing military maneuvers when his plane crashed in the ocean. He was still alive, but unable to survive in the water before rescuers reached him. Because of this, my Uncle Fred set out to invent the inflatable life raft. After the US entered the fighting in WWII, both the Navy and Air Force adopted my uncle's rafts. He went on to invent several other military inflatables that saved many lives. You can read about him and them on The Patten company web page.
How does this relate to our Weapon of the Week? Our fear of death. Are you afraid to die? I know most people I talk to are very afraid. The Bible says that humans are in bondage to the fear of death, but that Christ came to destroy the one who holds the power of Death, Satan (Hebrews 2)
Check out these verses in 1 Corinthians 15:
22 For as in Adam all die, so in Christ all will be made alive.
25-26. For he must reign until he has put all his enemies under his feet. The last enemy to be destroyed is death.
54-57. When the perishable has been clothed with the imperishable, and the mortal with immortality, then the saying that is written will come true: "Death has been swallowed up in victory. Where, O death, is your victory? Where, O death, is your sting?" The sting of death is sin, and the power of sin is the law. But thanks be to God! He gives us the victory through our Lord Jesus Christ.
Now, I'm not saying that our physical bodies will not die. They will. But for those of us who trust in Jesus for our salvation, it will be like taking off an old, haggard coat, dropping it to the floor and walking through a door into the most glorious place you can imagine.
Nothing to fear at all!