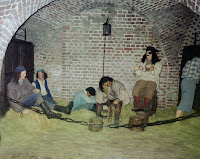 I'm writing a scene in the first book of my Charleston series, Blossoms of Faith, and my heroine is imprisoned in the Watch Tower dungeon. It so happens that I've been to that very spot in my travels last year to Charleston, so it was especially real to me when I began to write the scene. I thought I'd post the picture of one of the prison cells that I took when I was down there. Obviously, they had just caught some pirates and had them chained up! But no worries, they were fairly subdued by the time we got there. Although they did make some rather crude propositions to my daughter. HA.
Being there really helped me to write the scene because I got a sense of the smells, feels, temperature, lighting..etc.. of the place. But you can be the judge when you read the book.
It so happens that I was reading today in Genesis the account of Joseph where he was thrown into the captain of the guard's prison for doing nothing wrong. And it appears from the text, that he may have spent at least 10 years there. What always astounds me about Joseph is that no matter what travesties befell him, he never turned away from God. He never got angry and bitter, never stopped praying or giving the glory to God. I believe this is one of the keys to living the full Christian life. You see, Joseph had a dream as a young man, a promise from God, and he never stopped believing it would come true. Because of that, it says in Genesis 39:21 that "The Lord was with Joseph in the prison and showed him His faithful love.... and later in verse 23 "The Lord was with him and caused everthing he did to succeed."
And if you remember the story, you'll also remember that at God's appointed time, Joseph was freed from the prison and made ruler over all Egypt. All in one day! When God's time comes, He works very quickly!
Posted by MaryLu Tyndall at 9:06 AM