My obsession with the sea! 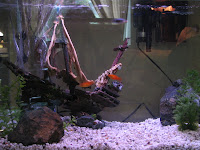 As many of you know, I have a heathly obsession with the ocean. I really don't know why. Maybe because I grew up a mile from the warm beaches of South Florida and learned to swim like a fish before I was three. Maybe it has something to do with the adventure, the mystery, the romance of the sea. Whatever the reason, I intend to incorporate at least some part of the sea in all my novels. When I was a kid, one of my hobbies was Aquariums. I used to have three or four good sized tanks in my bedroom. I just loved setting them up, caring for the fish, decorating them, and most of all just watching the fish swim around. It can be quite soothing. As a young adult, I migrated to Salt-water tanks. They are much harder to maintain and more expensive but at one point I had such a beautiful aquarium, it looked like a gorgeous reef off of Austrialia! The Earthquake of 1989 destroyed my salt water paradise and then I got busy with kids and job and life and never really set one up again. Until just recently, my eldest son, who has also taken an interest in Aquariums, set one up in his house, and encouraged me to do so as well. So, I'm posting a picture of my new Aquarium. It's not a salt-water, and it's kind of small, but it's a good start for me to get back into the hobby. Mainly, I wanted you to see that I purchased a sunken pirate ship to decorate it with. Isn't it cool?
Posted by MaryLu Tyndall at 9:40 AM