I have the weirdest cats!

As some of you may know from the bio on my books, I have 4 cats, well 4 presently, but at one time I had 6, and the number fluctuates depending on how many strays get word that there is a cat-lover in the neighborhood who can't turn away any feline who comes her way. Humm. My poor husband, who has learned to live with this fetish of mine, just shakes his head and looks the other way.
But for some reason, the cats I end up with are beyond a doubt the oddest cats in the world. For instance, here is Sniffles, named because she has had a constant cold since she was a kitten and none of the doctors say it's curable. She's 18 years old and a pile of constant mucus (think Turner and Hooch) And she has outlived all her children. Here she is sunbathing in the backyard, The Princess of Snot! 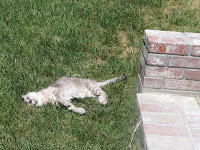 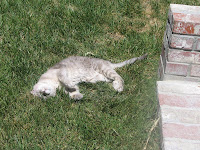 Then, there is Hershey, a stray my daughter handed over to me when she had to move to a smaller place. Hershey has lived up to her name. She is as big as a house and when she runs, her huge belly swings back and forth. Her meow comes out like broken violin and most of the time she cowers when you try to pet her. 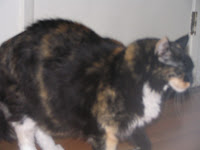 A recent addition to the house is Buster. He showed up at my door last summer, half starved to death. He's a wild one who likes to pick on my 3 girl cats so most of the time he stays outside where he likes to pretend he's the King of the Jungle. He loves to leave little pieces of lizards, birds and frogs in the yard for me to step on. But, be careful when you pet him. He's always in attack mode and loves to play by biting your hand. 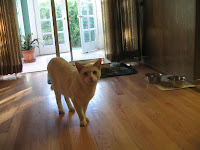 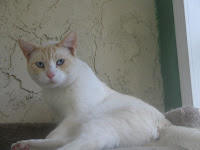 Last, but not least, there is Mental Kitty. I know, I know what a cruel name to call my cat, but her real name was Mitte Kitty--a name my daughter called her when we first found her wandering about the hills behind my house many years ago. Mitte apparently came from soe show on TV called Southpark. Anyway, one year when my Mom came out for Christmas, I asked her to open the door and call Mitte Kitty in for dinner and she promptly yelled out the front door "Mental Kitty, Mental Kitty" Needless to say, the name stuck, although my husband refuses to call her that and calls her Katie. So, you see why she's a bit Mental. She is terrified of Buster so she remains on my bed all day long. 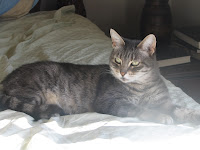 Since I work from home, these 4 little beasties are my constant companions and despite all their weirdness, I love them to death!
Posted by MaryLu Tyndall at 9:21 AM