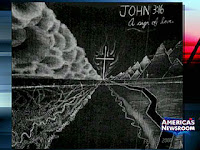 This is the kind of thing that drives me absolutley nuts! I heard this story yesterday on Glen Beck. Apparently a senior high school student in Madison, Wisconsin created the artwork I've posted here as part of an assignment to draw a landscape. When his teacher asked him to remove the Bible reference because it was disturbing the other students, he refused, and consequently, she gave him a zero on the project. When he protested, the teacher showed him a policy he had signed at the beginning of the year which prohibited any violence, blood, sexual connotations, or religious beliefs in their artwork, and told him that he had signed away his constitutional rights when he had signed the policy.
A couple of things really bother me about what she said to him. First, how can anyone put religious beliefs in the same list with violence, blood, and sex? Basically you're saying someone's personal faith is just as bad and dangerous as those other things! Secondly, there is no way anyone in this country can ever sign away their constitutional rights. So, what did the student do? He tore up his policy in front of the teacher (gotta love this kid!) and he was promptly suspended.
The schools excuse? The student's artwork infringed on the other student's rights. What??? (me banging head against wall)
It may interest you to know that some of the other artwork in that same class included drawings of Medusa, the Grim Reaper with a scythe, and a being with a horned head and protruding tongue. Also in the school itself, Buddha and Hindu figurines are on display in a social studies classroom where the teacher passionately teaches Hindu principles to students.
In addition, a replica of Michaelangelo's "The Creation of Man" is displayed at the school's entrance, a picture of a six-limbed Hindu deity is in the school's hallway, and a drawing of a robed sorcerer hangs on a hallway bulletin board.
Humm....seems it's not all religions are banned at this school, only Christianity.
But what do we expect? Satan is not going to waste his time going after dead religions that lead people exactly where he wants them--straight to hell. No, he's going to attack the only true religion, the only way for people to truly know God, be redeemed, and end up in heaven.
I'm proud of this student, and I wish we had more Christians like him in this country. He has now filed a lawsuit against the school, and I for one, pray he wins! If he doesn't, we Christians will soon find ourselves and our faith being outlawed by this country.
If you're interested in reading this article, here's the link: http://www.foxnews.com/story/0,2933,344350,00.html
Posted by MaryLu Tyndall at 12:57 PM