Me adventures upon the sea!

Well, I made it back (unfortunately) from my tall ship adventure this past weekend in San Diego. Here's a list of some of the ships my husband and I toured.
A three-masted Schooner, the American Pride

A topsail Schooner, the Californian 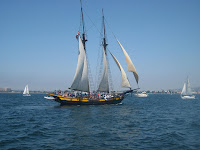 The Barque, Star of India (Always docked in San Diego)
and the really cool ones:
The HMS Bounty (used in the movie, Mutiny on the Bounty) 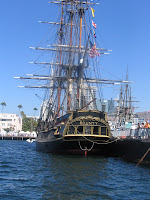 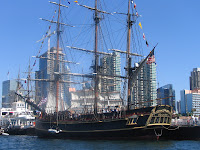 And the HMS Surprise (my personal favorite and the same ship used in the movie, Master and Commander) 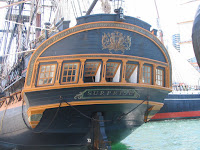 The best part, however, was the cannon battle sail. A three hour tour of San Diego Bay aboard The Spirit of Dana Point during which we engaged in gun battle with the Schooner, American Pride, (personally, I think we whipped 'em) in addition to various tourist sailboats and basically anyone that got in our way! Needless to say, I was in my element and never wanted to leave!
Here we are firing on the American Pride 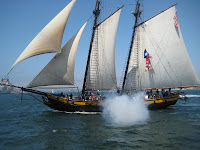 And the shot from our ship 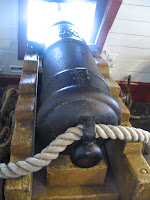 Our captain seeking out another ship to plunder! 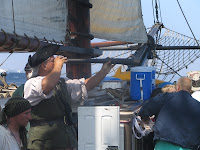 I have lots more pictures that I plan on posting on my website next week. If you're interested, check them out. I'll put the under the tab: Tall ships.
I had a blast (no pun intended) and realize one thing. I was born in the wrong century!
Avast, ye maties. Prepare to be boarded. 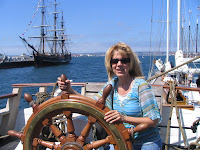 Posted by MaryLu Tyndall at 7:32 PM