Congratulations to Sheri!! who won a copy of The Red Siren last week. For those of you who didn't win, you have another chance this week. Allow me to introduce you to the hero of The Red Siren, Dajon Waite. If you'd like to be entered in the drawing for the book, please leave a comment (with email addy) about something you found interesting about Dajon. 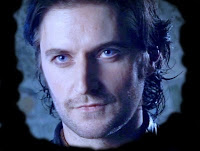 Brief Description: With dark brown hair, a rugged face and blue eyes the color of the sky, Dajon presents a handsome figure donned in his British Navy uniform. A large man for his day, his deep commanding voice and authoritative manner invoke obedience among his crew. Yet beneath his commanding and strict exterior, Dajon possesses the chivalrous heart of a true romantic and a love for God that outweighs everything else. Whenever I think of Dajon, a picture of the British actor, Richard Armitage, comes to mind. Dark and strong, but with a hint of playfulness on his face.

Quirks: Though Dajon prides himself on his crisp, clean appearance as a navy officer, he cannot keep one rebellious strand of his hair from incessantly escaping his queue. Beads of sweat appear on his forehead when he is angry or annoyed.

Inspiration: Dajon is the perfect example of someone trying to make up for a wicked past by following a set of rules. Instead of accepting God’s forgiveness and grace, Dajon believes he must pay penance for past sins by doing as many good works as he can. Hence, he joins the British Navy to protect and care for his fellow Englishmen. In addition, he believes that in order to avoid future mistakes, one must adhere to every rule thrust upon them by both God and man. This combines to make Dajon a very disciplined, pious, and unyielding man who is neither happy, nor at peace with the life he has chosen. I often battle, myself, with the idea of free grace and forgiveness. It seems too easy, doesn’t it? I feel like I should somehow earn God’s forgiveness. Otherwise it doesn’t seem real. So, I really enjoyed writing Dajon’s story, especially when he falls in love with wild, rebellious Faith.
Posted by MaryLu Tyndall at 4:33 PM