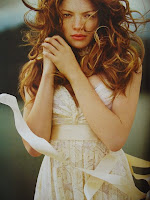 In January, my first book, The Red Siren, in the new series, Charles Towne Belles, releases and in honor I'm giving away 5 free advanced copies! Every Monday in December, I'll post something about The Red Siren. All you need to do is leave a comment (please leave your email address too!) And at the end of every week (Sunday), I'll draw a name. The winner will be announced each Monday. Sound good?
Today, I'm introducing you to Miss Faith Westcott, the heroine of the story.

Brief Description: Faith is tall for a woman and of medium build. She likes to wear her fiery red hair unfettered in long curls down her back. (that is until her father reprimands her for the impropriety). Her dark auburn eyes are full of life and determination. She has a cluster of freckles atop her nose that are the only mark on her otherwise creamy skin. She carries herself with a confidence and superiority that deter most suitors. That is, until Captain Dajon Waite crosses her path.
I love this picture. It reminds me so much of what Faith would look like. Wild, red hair, tempered by a hint on innocence in her pose, yet those eyes: filled with sorrow, yet such strength and determination!

Quirks: Faith constantly throws her hands to her hips in an act of superiority. The freckles on top of her nose darken when she is angry or frightened.

Inspiration: Faith has every quality which a female pirate needs in order to be successful: Audacity, fortitude, and the ability to command an unruly crew. I loved writing her character because she possesses the wit, courage, and boldness that I only dream of possessing! She’s the kind of woman other women look up to as a role-model (except the pirating part): Fiercely loyal to family, dependable, smart, a woman who takes charge and does what needs to be done, instead of sitting back and waiting for a man to rescue her. She has lofty goals and a purpose for everything she does. But instead of using her strengths for good, she uses them to become a pirate. Wounded by a series of tragedies that have struck her family, she turns her back on God and on the rules of society and seeks other ways to complete the mission of caring for her sisters handed down to her by her mother on her deathbed.
What qualities does Faith possess that you can relate to or that you admire? And what qualities make you cringe? Do you know anyone like Faith?
Posted by MaryLu Tyndall at 7:47 AM