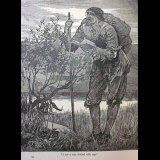 Last week we saw that poor Christian, after reading the Bible, became weighed down with a huge burden of sin on his back. He learned that the place where he lived, aptly named, The City of Destruction, was going to be completely destroyed with fire and everyone in it, and though he tried to warn his family and friends, they all thought he'd lost his mind. Finally, he met a man named Evangelist who directed him to follow a path to the narrow gate where, if he passed through it, he would journey further to the Celestial city and be safe.
This week, we see Christian leaving everything behind, all his material possessions and his family and friends and heading toward this narrow gate. Yet even as he ran toward it, his neighbors and friends came out of their homes to mock him and toss insults at him. In particular, two men stopped him, Obstinate and Pliable, trying to convince him to return home.
How often have you set out to do the right thing; to follow God with all your heart, and someone or something jumps in your path to try and stop you? I always find that if I make a decision to do something for God, whether its to share the gospel with someone, or humble myself and ask forgiveness from someone, or spend more time reading my Bible, inevitably, I get hit with a million things and reasons why I can't follow through with it. It could be a person, or it could be time, or the Devil whispering excuses in my ear . Does that happen to you?
The world covets its sons
The world pursues its sons
Obstinate, who is a type of the world, resorts to using the following: 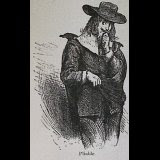 ms interested and continues on with Christian. He wants to know everything about this Celestial place Christiain is going to, in particular all the blessings and glories. He even encourages Christian to run faster.

Have you ever met people like this? They are more interested in the glories, the blessings, the good things about Christianity than in actually being a Christian. They think being a Christian will be easy and pleasurable and fun. One thing of importance to note is that Pliable did not carry a burden on his back. In other words, he had no awareness of his own sin. Without true repentance, there is no remission of sin. Have you ever known someone who claimed to be a Christian, but as soon as things got tough or didn't work out the way they thought, they turned their back on God and went their own way?

So, it's no wonder that when Christian and Pliable fall into a swamp

which is called the Slough of Despond, that Pliable gets frustrated and discouraged and as soon as he gets out, he abandons Christian and heads home. Christian continues to struggle, refusing to give up, until finally a man named Help comes along and gets him out.

This Slough of Despond represents a place where the enemy tries to trap us with extreme guilt. We are weighed down with a huge awareness of our own weakness and sin and cannot seem to escape. Many give up at this point and go back to the world where they are accepted and where they don't have to deal with guilt. But Christian perservered, refusing to give up. I believe this person Help that comes along is someone like a pastor or a Bible Study leader, or a mentor or close friend who comes alongside us and gently counsels us with the Word of God until we pull out of the depression we are in. Do you know someone like that? Someone who really helped you at one time in your life when you thought you'd never make it?

Tune in next week when Christian is once again distracted from reaching the narrow gate by Mr. Worldly Wise.