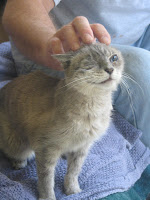 Therefore, just as through one man sin entered into the world, and death through sin, and so death spread to all men, because all sinned. . . but where sin increased, grace abounded all the more, so that, as sin reigned in death, even so grace would reign through righteousness to eternal life through Jesus Christ our Lord. Romans 5

Yesterday, I had to put my precious cat Sniffles down. It was one of the hardest things I've had to do. We had her for 19 years. But in my grief, I got to thinking about death. Here are my thoughts on the subject:

People say death is natural. It’s a natural part of life. I don’t believe that. Death is the most unnatural thing anyone could experience. It’s wicked and vile and comes from the deepest parts of hell—a thief intent on taking what is not his. If it were natural, it would happen smoothly and gracefully like the budding of a new flower or the sprinkle of a spring rain, but if you’ve seen anyone you love die, you know that’s not true. It is torturous and miserable as the person writhes in agony caught in an eternal struggle with some unseen demon who has come to rip their soul from them. It’s nasty and unpleasant and carries a most putrid stench, and when it is over, it leaves those behind with a mound of open, festering wounds which never truly heal.

Sorry to be so morbid, but as I continued pondering it, I realized something. Death was NEVER part of God's plan. It came into being at the fall of man. It truly is an entity ruled by Satan. But Jesus came to set us free from death! As it says in Isaiah 25:
He will swallow up death for all time, And the Lord GOD will wipe tears away from all faces,
and in 1 Corinthians 15
Death is swallowed up in victory. O death, where is your victory? O death, where is your sting?
Someday, we believers will live in a world where no one dies, not even our pets. What a wonderful world that will be!
Posted by MaryLu Tyndall at 7:00 AM