The winner of last week's drawing for a free copy of The Blue Enchantress is: Tori! Tori, please contact me with your email address so I can get your information!
(I forgot to tell everyone to please put your email address in your comment so I can get ahold of you)
But don't despair! If you didn't win, your name automatically went into a much larger bucket to win the sea-faring gift basket at the end of the month. AND I'm giving away another free copy of The Blue Enchantress this week! Just leave a comment on this post about Nathaniel.
And every time you leave a comment this week, your name will AGAIN be entered into the drawing for the sea-faring basket, even if it's already in there.
And now, Nathaniel Mason. 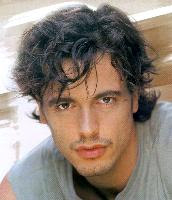 scription: Nathaniel Mason is a working man—a ship builder by trade and the captain of his own fleet of merchant ships. At age 25, tall and muscular, with dark brown wavy hair, tanned skin, and walnut colored eyes, he often smells of the wood and tar he uses to build ships. He is hard worker who has spent years working and building the two ships he now owns and operates on the . Though he values morality, integrity, and decency, he hides a shameful heritage behind a façade of success, hoping to erase the stain of his mother’s occupation and elevate himself to a position of respect among the citizens of Charles Towne. But in so doing, he is ignoring the call of God on his life to preach while battling an overwhelming attraction to Hope, a woman who reminds him too much of his mother. But Hope has a thing or two to teach this man who thinks he has it all together!

Quirks: You’ll often hear Nathaniel say “Fire and thunder” whenever he is upset or angry. A jagged blue scar mars his left side where he was stabbed as a young boy trying to protect his mother. The wound burns whenever he is threatened or feeling uneasy and he often reaches up to rub it during those times.

Inspiration: Nathaniel Mason is a godly man with exceptional morals and a strong desire to do the will of God, save for one tiny flaw—formed from a difficult past—that causes him to deviate from that perfect path. I love Nathaniel. He is such a good example for everyone around him and so capable and resourceful. As a natural leader, people are drawn to him, rely on him and look up to him. The amazing thing is, he doesn’t even recognize the gifts God has given him. He is the type of man who so much wants to do the right thing, that sometimes he is trying too hard on his own power and needs to let go and let God.

Nathaniel's biggest flaw is that he values the opinions of man over the opinions of God. And because of that, he tries to become successful by the world's standards and not by God's. I think all of us are guilty of this at one time or another in our lives, don't you? Who doesn't want to be successful and be praised by our friends and family and by our society? I don't think that this feeling in and of itself is necessarily wrong. But it becomes wrong when we put this desire above seeking God and His will first.

If you belong to God, He's not going to let you get away with this for very long! He will pursue you and manipulate the circumstances in your life until you follow His will for your life. I often get asked how do you know what God's will is for your life? The answer is so simple. Do you think God doesn't wants you to know His will for your life? Do you think He likes being sneaky and playing tricks or 20 questions with you? NO. He's a loving Father. The key is putting Him first above everything else in your life and then waiting for Him to show you.

Leave a comment about your thoughts on Nathaniel or anything in this post and you'll be entered not only in this week's contest for a free copy of The Blue Enchantress, but also in a drawing 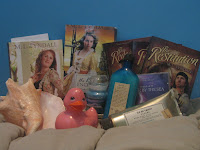 for the gift basket below! (Don't forget to include your email address where I can reach you)