Fort McHenry and the American Spirit.

It was a cloudy, stormy day when I visited Fort McHenry in Baltimore last week. Oddly enough, I soon learned that the night of the British bombardment, it was also a stormy night. This tiny fort sits out on a circular peninsula that guards the entrance to Baltimore's harbor. I planned my trip here long before I discovered that the very weekend I intended to go, Fort McHenry was hosting a war reenactment. That's what I call a God moment! If you don't know what happened at this fort, it's a great story that will inspire you and bolster your patriotism.
On the night of September 14th, 1814, The British Navy (The most powerful navy in the world at that time) attacked the tiny port town of Baltimore, both on land and by sea. The British labeled Baltimore a "nest of pirates" because of all the privateers which were launched from there during the war and all the havoc they caused among British merchant ships. Now, the British intended retribution. Once they had Baltimore, they believed they would continue on and conquer the entire nation.
Here's a picture of the fort. It isn't very large. 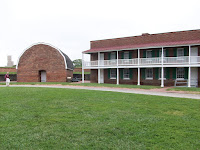 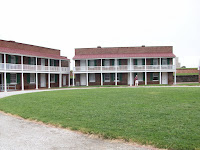 What most people don't know is that after the British burned Washington and our President, Madison was on the run, Baltimore was left completely on it's own. There was no major army there except for around 1000 troops that were comprised of both army and citizen milita. No one as coming to their aid. They were all alone. Off shore, not 2 miles from the fort sat the British fleet--the most powerful navy in the world at that time. 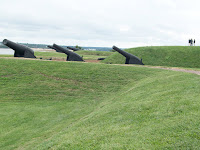 And here, I got an awesome picture of the Pride of Baltimore sailing by the fort and firing upon them. 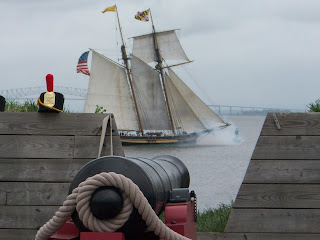 The bombardment began on the evening of Sept 14, 1814. For the next 25 hours some 1,800 rockets and cannon bombs were launched at the fort. Unfortunately, the British fleet was out of the Fort's range so all the men could do was duck and cover.

Here's a picture of the marching band at the fort. Their duty was to wake up the troops and play during marching and battle and at special events 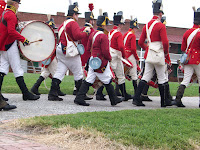 Check out this cool shot of a musket firing! 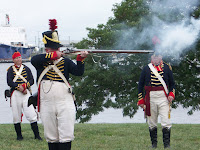 and the men manning the cannons 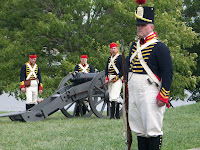 The miracle of this story is that only a handful of men were killed and a few more injured. As the story goes, a lawyer by the name of Francis Scott Key was on a nearby ship witnesses the bombardment of the fort. When the bombing ceased, he feared the worst--that the fort had fallen. But by dawn's early light, he saw the American Flag still flying above the fort and he was so overcome with emotion that he wrote our Star Spangled Banner.

In Book 3 of in my upcoming series you'll find out much more about Francis Scott Key.

Here is a picture of he and his wife. They were quite personable and willing to answer all of our questions: 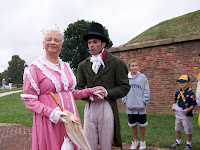 All in all, I learned a lot and had a great time! 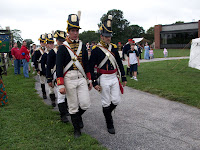