Is God ignoring you? 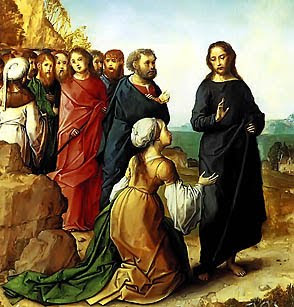 Have you been crying and crying out to God about some specific thing or request for awhile now.... maybe even years? Are you starting to wonder if He has heard you or if He really cares? I think this is a common misconception among Christians today. We are so used to instant gratification in our fast-paced world that if God doesn't answer our prayers with a definitive Yes or even a No as soon as we think He should, we think He has forgotten us. Nothing could be further from the truth.

Remember the lady in Matthew 15? She was a gentile woman whose daughter was "severely demon-posessed." I don't know about you but that sounds pretty serious. She came begging and pleading with Jesus to please heal her daughter. She cried out after him over and over. But the Bible says "He answered her not a word."  In other words, Jesus completely ignored her. His disciples finally had had enough of her crying so they asked Jesus to send her away. Jesus replied that He was not sent to heal people who were not Jews. In other words, by His reply, you might think He did not care.  Yet still the woman persisited. "Please, Lord" she said. Jesus turned to her and told her that it wasn't fitting to take the childrens' bread and throw it to the dogs. In other words, He majorly insulted her. So, let's get this straight. So far, Jesus
At this point, I would have given up and gone away angry. How about you? I mean, here I am begging for His help and He insults me? Kicks me when I'm down? My pride would have surged. How dare He? How rude! How insufferable!  But no, this woman humbled herself even further and told the Lord that even the dogs eat the scraps from their masters's table. What an answer! She accepted His insult, admitted her inadequacy--her complete unworthiness of anything but a scrap. Such humility. Such desperation!

Might I suggest to you that Jesus loved this woman immensely. He wasn't ignoring her. He was testing her. Did she truly believe He was the Son of God? Did she truly believe He could heal her daughter? If not, she would have gotten tired of asking and turned away when He continued to ignore her.  Jesus cared very much for his woman and her daughter. He wanted to know if she would persist even in face of his uncaring attitude. Did she believe He was her last hope and the only hope she had. If not, she would gone somewhere else. She would have given up. Did Jesus think she was a dog? I venture to say No. I venture to say He saw right into her heart and loved her and valued her. But he had one more test for her. You see, we can't approached God with any pride in our hearts. We must be willing to admit that we are sinful wretches in need of a Savior. We must be willing to admit that even scraps from the table of God are above what we deserve.

As soon as this woman passed all 3 of these test, Jesus turned and said "O woman, great is your faith! Let it be to you as you desire.” And her daughter was healed from that very hour.

So if you're not hearing from God. Don't give up. Be persistent. Have Faith and humble yourself before Almighty God. His ears are open to your cry. He may be waiting to see just how serious you are about following Him.
Posted by MaryLu Tyndall at 7:00 AM