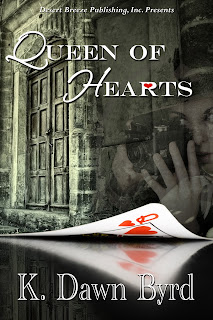 Daphne Dean is proud to be serving her country stateside during WWII as a reporter and an Office of Strategic Services operative. When the photograph she takes of the crowd at a murder scene places her on the mob's hit list, she's forced into hiding in a vacant mental asylum in the middle of nowhere with terrifying secrets of its own.

Daphne believed herself to still be in love with her ex-fiancée, Kenneth, until she spends several days locked away in the asylum with Vito, the mob boss' son. Can she put the terrifying events that occurred there behind her and allow herself to pursue a relationship with Vito? Or, will she return to Kenneth who has turned his back on his country by becoming a draft dodger and a black market racketeer? One thing's for sure, it won't matter if she can't escape the mental institution alive.


Author Bio: K. Dawn Byrd is an author of inspirational romance. She holds a masters degree in professional counseling from Liberty University that she believes gives her better insight into the minds, feelings and emotions of individuals, which helps her to better understand her characters and develop them more fully. Queen of Hearts, a WWII romantic suspense will release April 1 and Killing Time, a contemporary romantic suspense will release August 1, both with Desert Breeze Publishing.
K. Dawn Byrd is an avid blogger and gives away several books per week on her blog at www.kdawnbyrd.blogspot.com, most of which are signed by the authors. Her blog spotlights not only the books, but the authors also because we all want to know more about our favorite authors.

When not reading or writing, K. Dawn Byrd enjoys spending time with her husband of 14 years, walking their dogs beside a gorgeous lake near her home, and plotting the next story waiting to be told.

To learn more about Dawn and her books, go to her author website: http://www.kdawnbyrd.blogspot.com/

MaryLu Here:  I haven't read this book yet, but I've heard great things about it! It's an E-book and available for download at the following sites.

To purchase this e-book, click on the following links
Desert Breeze Publishing:
http://stores.desertbreezepublishing.com/-strse-70/Queen-of-Hearts/Detail.bok