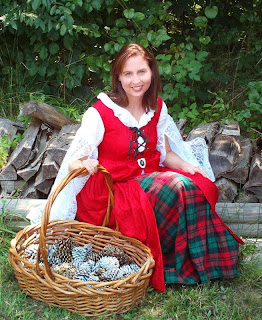 Tell everyone about your journey to publication. Was it difficult, long, miraculous?

Long and difficult. I started writing novels for publication in my mid-twenties. Thirteen years later, I had accumulated over 122+ agent rejections. Actually, I stopped counting at that point. I even quit writing for three years and starting. I started writing again in 2006, but I switched from secular to Christian fiction. Then in 2007, two of my manuscripts won awards in the American Christian Fiction Writers’ Genesis Contest, and I signed a contract with Terry Burns at Hartline Literary Agency. One year later, I finally received my first contract offer for Highland Blessings. By then, I had written seven novels.

Is there a message in Highland Blessings and if so, what do you hope readers will take away from reading the book (other than a very enjoyable time!)

Regardless of past wrongs and long-held grudges, God can mend any relationship, even clans of people—whole nations.

Do you believe God called you to write? If so, how do you know?

Yes. I tried to write secular romances for years and I got nowhere. Now that I look back, I see where God was trying to show me a different road, a better journey that He had planned for me. I remember sitting at an RWA National Conference at a luncheon table with Tyndale editors and being disappointed that I wasn’t with Berkley or Penguin and Putnam. An editor asked me what I wrote and all I could say was, “I don’t write Christian fiction.” A difficult period happened in our lives that changed me forever. I stopped writing for 3 years and during that time my relationship with God grew. I studied the Word a lot. A friend prayed for me—that God would give me the desire to write again. He did.

Six months later I discovered Kathleen Morgan’s Scottish Medieval, Embrace the Dawn. I couldn’t believe there was such as thing as a Christian Scottish Medieval. I rushed home and tried to retrieve my old Scottish Medieval, but I had deleted all my files and threw all my hard copies away. I finally found a Windows 95 disk with the old version of that manuscript and had to reformat it line by line. In 2006, I converted 2 secular manuscripts to Christian fiction. In 2007, I wrote 2 new manuscripts, completing a total of 7 manuscripts. Two of them won awards in the ACFW Genesis Contest that year and I signed with Terry Burns at Hartline Literary Agency. I wrote secular novels for more years than I wrote Christian fiction and it wasn’t until I switched to writing for God that things started happening for me.

What would you tell someone who asks you how to find God's will for their life?

Ask Him and then read his Word every day and keep asking Him until things start happening that give you peace and inspire you. 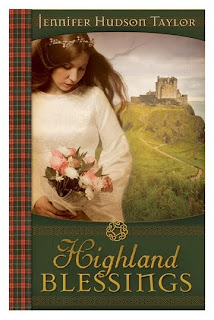 And now a bit about the book
Highland warrior Bryce MacPhearson kidnaps Akira MacKenzie on her wedding day to honor a promise he made to his dying father. When he forces Akira to wed him, hoping to end a half-century feud between their clans, she struggles to overcome her anger and resentment. . .Yet her strength in the Lord becomes a witness to Bryce. But there is a traitor in their midst . . . and murder is the ultimate weapon

My Endorsemenet:
Jenni fer Taylor has a winner with her debut novel, Highland Blessings. What’s not to love about battling Scottish clans, a lady kidnapped, romance, intrigue, and a mystery that will keep you turning pages to the very end? This is the kind of book you can curl up with on a rainy day and forget all your troubles as you plunge into the adventure and romance of 15th century Scotland . Highly recommended.

Leave a comment with your email address and I'll draw a winner next Friday, the 14th!

For more about Jennifer and her writing and books, check out her website:
http://www.jenniferhudsontaylor.com/
Posted by MaryLu Tyndall at 7:00 AM