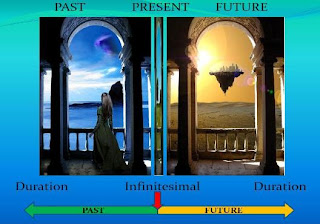 Time is one of those illusive concepts I have a really hard time grasping. It doesn't seem to follow any natural laws. The passage of time seems so relative!  If I'm having a good time, time passes by really fast! But when I'm bored and miserable, it creeps by like molasses.  How fair is that? I don't know about you but in the past decade, I'm sensing a speeding up of time. It seems to take less time for a day to pass, a week, a year...  In fact, it seems to be moving so fast, I sometimes forget what month or year it is..  (Yea, yea..  probably due to old age!)

To be honest with you, time has become my enemy, like some cruel taskmaster, it lurks over me with whip in hand waiting to strike me down for not accomplishing something within its boundaries.  Of course having book deadlines doesn't help much, but even before I had deadlines, I always had a disdain for time. And don't get me started on what time is doing to my face and body. Uggg..  Basically (and forgive me for the word)  but Time sucks.

That' why it is always such a comfort to me to know that God exists outside of time. In fact, God created time and set it in motion like the sands sifting through an hour glass. And some day, those sands will run out and the Lord will return to claim His own and make all things new!

But until that day, I'm also comforted by the fact that because God created time and is outside of time, He can also manipulate time. He does so several times in the Bible. He held the sun still for Joshua during an important battle. And in Isaiah 38, God moves time backward for Ahaz as a sign that He will do what He says.
But one of my favorite stories is found in John 6 where Jesus is walking on the water.

So when they had rowed about five and twenty or thirty furlongs, they see Jesus walking on the sea, and drawing nigh unto the ship: and they were afraid. But he saith unto them, It is I; (Literally I AM - releasing the power of Almight God by using His name) be not afraid. Then they willingly received him into the ship: and immediately the ship was at the land whither they went.

Jesus had told the disciples to go to the other side of the lake but a huge storm swept in and not only delayed them but threatened their life. When Jesus comes to them walking on the water, they at first think He's a ghost, but after they realize who He is, Jesus gets in the boat and CHAZAM, they are at the other side of the lake. !  Wow... that must have been some trip.

The lesson?  No matter how much you have on your plate, no matter how badly you're pressed for time, if you're in God's will, it doesn't matter how many storms blow in to interrupt your "schedule".  God can fast forward time and make it so you meet every deadline, every commitment.  Just trust in Him.
And believe me, I'm really writing this post for myself because I struggle with this issue all the time (pardon the pun) worrying about finishing this and finishing that and writing and being a wife and mother and cooking and cleaning the house and marketing.. on and on.. until I get myself all stressed and worried.  This is not pleasing to God. God wants us to rest in Him and Trust Him...    because He is trustworthy!
Posted by MaryLu Tyndall at 4:00 AM