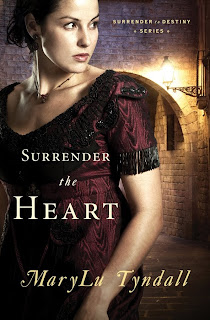 Alas, we come to the final week of Surrender the Heart month!  I hope you've enjoyed it as much as I have. Before we begin, let me annuonce the two winners from last week: JackieSmith and Karien
Congratulations, ladies!  Everyone else, you only have one more chance to win a free copy of my new book.

The answer to last week's quiz was B. "Then you shouldn't have snuck aboard my ship."
Many of you got it correct!! But in all fairness, it was a difficult question.

Now for this week's snippet.  Read the dialogue below and then based on what you know about Marianne, choose what you think would be her response.  No matter whether you are right or wrong, your name gets entered in this last contest. I will announce the two winners next Friday!

He proffered his elbow. “Milady, may I escort you to the railing? I believe that’s where you were heading before I interrupted?”

Marianne hesitated. Why was he being kind? She could not trust him. Squaring her shoulders, she lifted her chin. “I can make it on my own, thank you, Noah.”


“Just Captain will do.” He grinned.


Releasing the wood, Marianne started out again for the railing. “What brings you up here in the middle of the night?”


He chuckled. “I could ask you the same. But it’s not the middle of the night. Dawn will be upon us in minutes.” 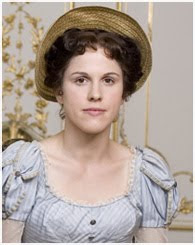 Marianne inched her shoes over the planks, forcing down her fear, determined to prove to this man that she was no coward. “Do the floors on this ship ever stop wobbling?”


Noah grinned. “Decks. The floors on a ship are called decks, Miss Denton.”


She grimaced. “What does it matter? You know what I mean.”


“If you are to spend months aboard, you should know the terminology so you aren’t mistaken for a landlubber.”


“But I am a landlubber.” She huffed. “A landlubber who has no intention of becoming a seaman—or seawoman.”


Noah walked beside her all the way to the railing as if he cared whether she fell. Marianne gripped the railing, the perspiration from her hands sliding over the wood. Taking a spot beside her, he inhaled a deep breath as he gazed upon the obsidian sea. He shook his hair behind him. Moonlight washed over him, setting his sun-bronzed skin aglow and dabbing silver atop the light stubble on his jaw. He planted his feet part and clutched the railing, the muscles in his arms flexing beneath his shirt. He seemed to have the weight of the world upon him, and Marianne tore her gaze away before any further sympathetic sentiments took root.


Facing her, he studied her intently.


Marianne stared at the railing, the moon, the fading stars, anywhere but at the liquid black death upon which they floated or the liquid blue death in the eyes of a man who hated her. “Can I help you with something, Captain?”


“You are afraid of the sea.” He glanced at the tight grip her trembling hands had on the railing.


She hated that it was so obvious. She hated showing this man any weakness. “You need not concern yourself with me, Captain.”


“As captain, I must concern myself with everyone on board.” His brows lifted. “What has me quite baffled, miss, is in light of this fear, why you would steal the very instruments which will aid us to shore. What were you planning on doing with them? Tossing them overboard?” He grinned.


A wave of shame heated Marianne’s face. She took a deep breath and tried to ignore the sea rushing past them not twenty feet below. “If you must know, yes, that was exactly my plan.”


He chuckled. Which further angered her. “I assure you, miss, I’ve been at sea long enough to know how to navigate without them. Difficult as it would be, it would only delay our reaching the safety of land.” He leaned toward her until she could feel his warm breath on her neck. “I would abandon your efforts to turn this ship around, Miss Denton. Mark my words, we will make it to England as well as our other ports of call.”


Marianne gave a smug huff. England perhaps, but once he discovered she had ruined his precious cargo, he’d have no choice but to return home to Baltimore.
Now, which one of these do you think Marianne said?

A."I fear I must confess a grievous sin."
B. "I plead with you, Captain. I cannot bear this sea another minute."
C. “We shall see, Captain Noah.”
D. "You are far too handsome a captain to be so cruel."
E. "Perhaps I shall use my feminine charms to persuade you otherwise."
Posted by MaryLu Tyndall at 4:00 AM