Week 2 of Surrender the Heart Month!

The 2 winners of last week's drawing are: Melanie I and Hannah!!! Congratulations to these ladies! And than you all for entering. But don't give up! I've giving away another 2 copies this week. Simply read the post below, leave a comment and I'll draw 2 more names next Friday!

Today, we will learn about the Hero in Surrender the Heart, Noah Brenin 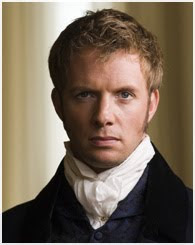 Brief Description: Noah is a driven man. At age six and twenty, with brown hair streaked by the sun, tan skin, deep blue eyes, and the muscular physique of a seaman, he presents quite a dashing figure around Baltimore. But marriage is the last thing on his mind. He has more important matters to attend to, such as keeping the Brenin merchant business afloat. Recent embargos and his own failures have cost the business dearly and caused his overbearing father to demand more and more from him. Bearing the guilt of an accident in his youth, Noah pushes himself to the limit, hoping to make up for the incident to his father and mother. He has no time for God, nor does he believe in destiny. Nothing matters except making enough wealth to pay for the past—not the upcoming war, not his country, and certainly not marrying Marianne Denton.


Strengths: Natural leader, brave, confident, hard working, honorable
Weaknesses: Selfish, unpatriotic, shallow, loyal only to self and family
Quirks: When Noah gets nervous or angry, he rubs the back of his neck.

Inspiration: I took my inspiration for Noah from people I’ve met who have been burdened down with guilt. Guilt can do horrible things to people. It can cause them to do things they would normally never do. The guilty person is like someone carrying a huge burden. He’s always trying to unload it, by either shifting it to someone else, or pursuing a course he thinks will somehow pay the fee to have it removed. A guilty person is obsessed with self because guilt feeds on selfishness. In Noah’s case, his desire to appease his guilt has overtaken his life and caused him to not care for anyone, not even God or his country. But things change quickly when he encounters Miss Marianne Denton!
Posted by MaryLu Tyndall at 4:00 AM