Is there a revival on the horizon for America? 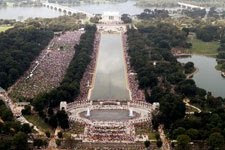 Over the weekend, talk show host Glenn Beck held a rally in Washington DC at the Lincoln Memorial. I wanted to attend this rally so badly but coming from California, finances just weren't there. Whatever you think of Glenn Beck, if you've ever taken time to listen to his message, you might be shocked to discover that it is only the simple message of turning this nation back to God. That was the entire purpose of this rally, to remind people of our great history, of what our founding fathers fought so ardently to achieve, and to get back to that strong foundation that was laid upon the Bible and Jesus Christ. Like Beck, I see no other solution to the problems of this nation. We have created a HUGE mess of our own doing. We are deep in the well of despair, discouragement, violence, financial collapse, rampant crime and immorality and depression and it's only getting deeper. The only way out is to look up! No matter what anyone says, this nation is a Christian Nation. If you don't believe me, do your homework and seek out original texts and sources written in our founding father's own words. The history you learned in school has been watered down and filtered through a liberal sieve. A good place to start is Dave Barton's http://www.wallbuilders.com/

Over 100,000 people attended this rally. I've only seen clips of it so far but intend to watch it on Glenn's site. These people came with their kids and their hope and their faith and their love of country and stood with Glenn to plead with Almighty God for His Forgiveness and ask for His help to heal our land and make America once again the shining city on the hill.  If we lose our freedom like those in Washington are trying to do, then who will be the champion for freedom around the world? Who will be the country first to any disaster with supplies and humanitarian aid? Who will be the country who will send out more missionaries than any other country? What country will people scramble to become citizens of because here in America, we are free?

I sense something changing in the Spiritual realm and it is a good thing. In my 51 years, I've never seen such a grand rally centered around returning to God in Washington DC. Never. Preaches and priests and pastors and rabbis are started to take a stand. Some are crawling out of their church dungeons and once again preaching the truth. They are sick of being told they cannot talk about politics from the pulpit. Did you know that before the American Revolution, it was the preachers who got the people stirred up to revolt? Preachers talked about government all the time from their pulpits and were heavily involved in, not only the war, but in forming the Declaration and the Constitution. Now, our pastors are told they can't encourage voters to vote a certain way or they'll lose their tax-exempt status. Really? If that is true than why did our country's preachers continue to preach about politics from the pulpit long after our nation was formed?  Why are we lying down and taking this? If Thomas Jefferson wanted separation of church and state so much (which by the way is only found in one of his letters and nowhere in the Constitution) then why was he one of the regular attendees at the church service held INSIDE the Capitol building each Sunday?

We are at a crossroads. Whether you're just  a teenager or a grandmother, and whether you have an interest in politics or not, I ask you to get on your knees at least once a day and repent of your sins, and ask Him to heal America--to make her what she once was. One Nation, under God. Indivisible. With Liberty and Justice for All!   If not, the America you know today may not be the America you'll find yourself  in, in 20 years. And believe me it won't be pretty.  Then go out and do something. Educate yourself and discuss issues with your friends. Start a History of America club at your school or library. Read what he founding Father's actually said! Tell your friends. And when the time comes, vote. But most of all pray.

If my people, who are called by my name, will humble themselves and pray and seek my face and turn from their wicked ways, then will I hear from heaven and will forgive their sin and will heal their land 2 Chron 7:14
Posted by MaryLu Tyndall at 4:00 AM