Win a copy of Nightshade by Ronie Kendig!!!

I have the privilege of introducing you to a friend of mine and a great author, Ronie Kendig. I've recently read her new release, Nightshade, and I highly recommend it.  It isn't an historical. In fact, it's labeled a military romantic suspense, but I'm telling you, this book will keep you up late at night. 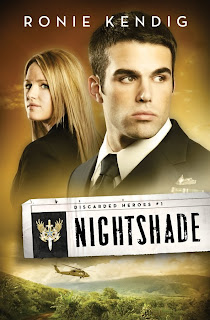 Here's a bit about NIGHTSHADE:


Soldiers all across the globe are returning home to their families after brutal tours of duty. They are discharged from the service. . .and on their own. Meet Max Jacobs, one of these discarded heroes, as he faces a wall of failure—in his career, his friendships, and his marriage. Failing again—this time to end his life—he is offered a thread of hope. Are covert government operations the answer for him, or will they only bring more danger and dissension upon his broken family?

And my review:
Even up to the very last page! I have to admit, I get bored quite easily with so many books I read these days, but that was NOT the case with Ms. Kendig's new release Nightshade! This new author has a definite talent in creating likeable, real characters and then placing them in the most harrowing situations! The hero, Max, is one angry dude, but there's a good reason for his anger. He's also a true hero in every sense of the word. Noble, honorable, protecting, strong, brave. Honestly, we could use more men like him in this day and age. Sydney, the heroine, was also strong, sensitive, hurting, stubborn and a lot more like me than I cared to admit. She and Max belonged together, but they just didn't know it through most of the book! Ms. Kendig makes us truly care for them and want to see them happy, then she thrusts them into every imaginable deathly dangerous situation! A fun, intense rollar coaster ride that I guarantee will leave you breathless!

Tell us a little about yourself, Ronie.
In 2010, I will celebrate my 20th wedding anniversary. With my husband, we have four children and two dogs. I have a BS in Psychology and grew up an Army brat.


What was your motivation behind this project?
I've always loved writing military or action-adventure stories. But one Sunday during church, a woman requested prayer. Her husband was a Navy SEAL and his anger and PTSD were destroying their marriage. It was a moment of stunning clarity for me--I knew it would be a grave injustice to ever pen a story that romanticized our heroes. Don't get me wrong--they *are* heroes, but they're also people with hurts/needs, and I think that is often forgotten.

What do you hope folks will gain from this project?
I hope readers will come to the series with an open mind, that they'd find hope & healing, and perhaps a desire to support our men & women in the armed forces with more compassion, more prayer, and more understanding. Above all, I pray that the wounded of heart and/or soul will find hope in God.

How were you personally impacted by working on this project?
Writing this story took a huge emotional toll, as has its sequel, which I'm working on now. The research alone was heart-breaking, but delving so deep into a character with such intensity drained me. I had to prep myself every time through prayer and mental focus to really jump in and get the story written.

Anything else you'd like readers / listeners to know: I love to hear from readers, and they can visit me online at my website or on my Facebook fan site. The Discarded Heroes series includes: Nightshade, Digitalis, Wolfsbane, and Firethorn. I also have an espionage thriller, Dead Reckoning, through Abingdon Press! 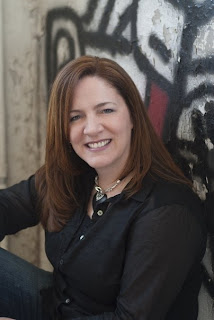 Ronie Kendig has a BS in Psychology and is a wife, mother of four, and avid writer. Her novels include an espionage thriller, Dead Reckoning and a military series that focuses on PTSD and our heroes: The Discarded Heroes series. NIGHTSHADE, Book #1 released July 2010 and Book #2, Digitalis, will release January 2011.
In addition to speaking engagements, Ronie volunteers with the American Christian Fiction Writers, and she is a monthly columnist at the award-winning blog, Novel Journey. Ronie can be found online at www.roniekendig.com or at www.discardedheroes.com.

Leave a comment and your email address and I'll enter you to win a free copy. To be announced, August 27th!
Posted by MaryLu Tyndall at 4:00 AM