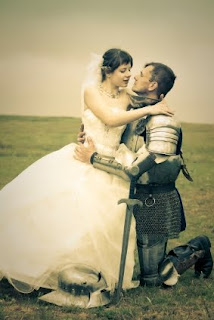 I've been reading through Genesis and came upon the tragic story of Dinah's rape in Genesis 34. It's definitely not one of those stories that gets talked about in church. In fact, I've never heard a sermon on it! In a nutshell, the story goes that Dinah, who is the daughter of Jacob and granddaughter of Issac went out on a trip to "see the daughters of the land"  A couple of things come to mind here.

What was she doing going out alone without protection?
Why was she friends with the daughters of the idol-worshiping nations?

Anyway, the local prince of a foreign nation saw her and the Bible says that he violated her. After the act, apparently this prince decides that he likes Dinah. It says "his soul was strongly attracted to Dinah... and he loved the young woman and spoke kindly to her."
Now that strikes me as weird. First he rapes her and then he tries to be nice? In other words, he gets what he wants from her and then romances her. Kind of backwards, wouldn't you say?

Of course the story continues with his passion to have Dinah as wife. In fact, he takes Dinah to stay in his house while he sends his father over to Jacob to ask permission to marry her. Again, that seems a little backward to me.  The story has a tragic ending for this young prince and I encourage you to read it for yourself.
But right now I want to contrast it with God's way of doing romance found in Genesis 24
Issac needs a wife so Abraham his father sends his servant back to his people and the country where Abraham came from to choose a woman. This servant, whom many scholars believe is a picture of the Holy Spirit, goes on the journey, praying the entire way for God to show him the lady God has chosen. Once he finds her, he showers her and her family with many gifts and then asks permission of the father. Permission is granted. And the lady is also given a choice of her own whether she wishes to go with this man and marry Issac. She agrees and leaves her home with the servant. Some time later, Issac is in the fields and sees his bride from afar off and runs to her. They meet and he takes her into his mother's tent and marries her.

Now let me get to my point.  Satan hates God's way of doing romance. So, what does Satan do? He perverts it. He twists it around until its backwards and strips it of it's beauty and fulfillment.

He puts sex before love, dominance before romance, prison before permission.

He knows God's way is perfect and beautiful and will bring much joy to a man and woman. But Satan wants to ruin  your life and make you miserable. As I look around this world today, I think he's doing a pretty good job. Unwanted pregnancies, abortions, divorce, rampant STDS

Which type of romance do you want? Which one stirs your heart and which one makes you cringe? I don't believe Dinah set out to be ravished. But I think she was being stupid. She put herself in a dangerous situation by hanging out with the wrong people and leaving herself unprotected. Although the Bible doesn't specify, I don't believe this was a violent rape. I think this prince sweet talked her into it. Why else wouldn't she have run away from him instead of stayed in his house?

It also occurred to me that this is a picture of the way God romances us! Like I said in my last post, He's a gentleman. He seeks us out. He woos us. He showers us with gifts, whispers love songs in our ears, and gently urges us to accept Him. Contrast that with the way Satan approaches us. He forces His will on us, tries to steal from us, and demands our worship or else.


From someone who had experienced both types of romance, I"m here to tell you that God's way of romance is so much better!  Don't settle for anything less but His perfect plan for you!

For more info on the topic :  http://www.davidmacd.com/catholic/chastity.htm
Posted by MaryLu Tyndall at 4:00 AM