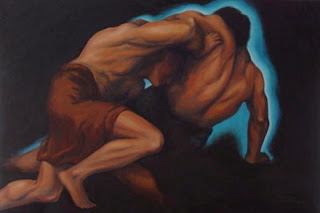 Remember the story in Genesis 32 where Jacob spent an entire night wrestling with God? If you don't, you should go over there and read the entire story. When you stop and think about it, it's actually fascinating. You see, Jacob and his entire family and all of his servants were about to be annihilated, wiped off the map, murdered by his brother Esau who was on the way with 400 fighting men to see Jacob.  The trouble was, Jacob deserved it. He had swindled his brother out of his birth right and then his blessing as the eldest son. This was a HUGE deal at the time. It would be like stealing your brother's car, house, and job today. Not only job, but any hope of making a success out of his life.

So, Jacob was in a jam. He had no where to turn. Perhaps you can relate. I know I can! Has there ever been a moment in your life when you felt like everything was falling apart? Perhaps you or a loved one were diagnosed with a terminal disease, perhaps you lost your job and would be out on the street in a matter of months, perhaps your husband or wife left you, or the love of your life dumped you or ran off with another. Or maybe like Jacob, you were in a very dangerous situation.  I mean, I'm talking some serious stuff here. Life altering circumstances.  So what do you do?


Aren't these the type of things most people do? I know it's easy to fall into one of these reactions. It's human. But does Jacob do that?
No, Jacob wrestled with God all night long. I actually believe He did wrestle with God. I believe this was Jesus in bodily form. Why? Because Jacob overpowered Him. Nobody can overpower God unless He's in a normal human body. In fact, Jacob wouldn't let Jesus go until He blessed him.  I often wonder how the wrestling match started. I imagine Jacob started praying. Maybe he was angry at God. Maybe he was pleading with Him for help. Whatever his mood, God showed up in bodily form. Perhaps Jesus prodded Jacob into the wrestling match with the intent to allow Jacob to get all his anger out. Or maybe Jesus told Jacob that if Jacob wanted His help, he'd have to work for it. Hey, you never know, right?

I have a true story that illustrates this. I knew a lady whose husband came home one day, packed his bags, told her he had another woman and was leaving. Though she begged him not to, he walked out the door, leaving her with 3 small children. Instead of allowing her anger to rage, instead of moping around crying and feeling sorry for herself, guess what my friend did?  She put the kids to bed and spent the ENTIRE night on her knees in prayer. And this just wasn't any kind of prayer. This was a wrestling kind of prayer. A heartfelt, sobbing, gut wrenching kind of prayer. (And no, she didn't pray that a large boulder would fall on her husband! though tempting, I'm sure)  She prayed for her husband. For his salvation, for him to repent, turn back to God and come home. She didn't just pray for an hour and get tired and fall asleep. She prayed and fasted ALL NIGHT long. She wrestled with God.
And you know what? In the morning, her husband came home and said he wanted to work things out if she'd take him back!

This is what I've learned from this scripture and this story. God wants to know if you're serious about this Christian thing. He wants to know if you truly believe what you say you do.  Are you willing to go the extra mile, spend a sleepless night, fast for a day or two, give up something precious to you, or are you the type who just flings a pitiful prayer toward heaven and then wallows in your sorrow and despair?


Are you willing to wrestle (spiritually) with God until He blesses you? I guarantee it, He would love nothing more!
Now, don't get me wrong. I'm not talking about demanding God answer your prayers or do things your way. That's not the type of wrestling I'm talking about. No, I'm talking about a true commitment to following God's will no matter the cost. Of demonstrating  your faith in Him when it hurts you the most. You may not get the answer you wanted as my friend did or Jacob did, but I guarantee you, you'll receive something far more valuable. You'll receive God's favor and blessing, along with the confidence that He's working all things in your life for your good and His glory.
Posted by MaryLu Tyndall at 4:00 AM