Disneyland and where our rights come from. 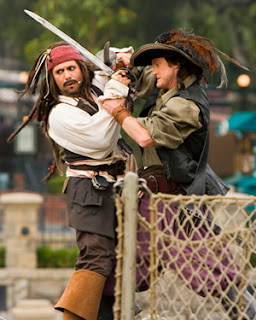 Well, by the time you read this, I'll be on my way to Disneyland for two days! Yea! Just me and my hubby. We haven't had a weekend away together in a long time and we decided to make the short trip south and spend a few days in a fantasy world far far away from reality. You can bet I'll be visiting the Pirates of the Caribbean ride more than once. If I remember my camera, pictures will be forthcoming!

Now. Where do your rights come from?

We hold these truths to be self-evident, that all men are created equal, that they are endowed by their Creator with certain unalienable Rights, that among these are Life, Liberty and the pursuit of Happiness.  The Declaration of Independence


Our forefathers believed that certain rights came from God and God alone. Rights to live in freedom, to pursue our own happiness. Because these rights come from God, they cannot be altered or changed by man. They also believed in a small, centralized national government. Why? Because they had come from countries where the government was huge and powerful and corrupt. They knew that power corrupts the hearts of men, so they gave the States more power than the national government. Yet years later, we find their desires have been drastically changed and perverted. Not just by this administration but from various presidents over the past one hundred years. Our current government considers itself to be the giver of rights. It knows what's best for us. The more powerful and large it becomes, the more regulations and laws it passes, the less rights individuals have.
When government takes the place of God, man is no longer free.

And can the liberties of a nation be thought secure if we have lost the only firm basis, a conviction in the minds of the people that these liberties are the gift of God? That they are not to be violated but by His wrath.
Thomas Jefferson, who is considered one of the least religious of our founding fathers.
Posted by MaryLu Tyndall at 4:00 AM