Happy Friday!
I thought you'd like to see the final version of the book cover for Surrender the Night, (due out in March 2011)  it's the one on the top. The one on the bottom was the first draft.  Now, you get to tell me what changes they made! 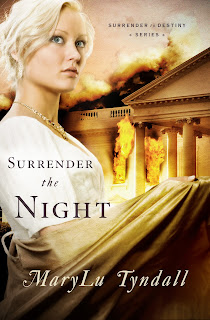 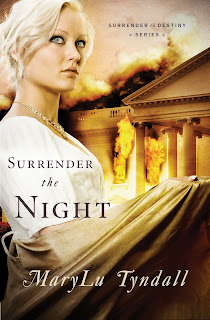 When British soldiers invade Baltimore amid the War of 1812, Rose McGuire, alone on her family farm, is easy prey for a brutal lieutenant. In the midst of the attack, she’s saved by British 2nd Lieutenant Alexander Reed. Will she now have to heal, as well as hide, this enemy soldier?
Alex hadn’t meant to kill his superior, nor get shot in the process. Now badly wounded, he’s at the mercy of this tomboy who obviously hates him. Can he trust her or will she turn him over to the Americans?
Rose is having trouble keeping Alex hidden from her family, the townspeople, and the man intent on courting her. Will the discovery of Alex’s presence force her to accept an abhorrent proposal?
As their love blooms, trouble looms, for the British are on the move again. This time, their target is Washington DC. Will these young lovers at heart find themselves enemies at war?
Writing NEWS
This week I got back to work on Surrender the Dawn. I'm trying a new writing strategy. Before I used to write each chapter until it was perfect. I would go over and over it and read it over and over before I would go onto the next chapter. But that requires a lot of both left(logic) and right(creativity) action.  So, now, I'm shutting down my left brain (Boy, won't my scientist hubby love that!)  and I'm just throwing myself into 1812 and writing from my right brain. I don't stop for anything. Not for some historic detail I don't know. Not for some word I can't remember, not for editing or grammar or dialogue tags or smells, emotions or anything.  And I'm not going to look over what I've done until I finish the book. Then what I hope to have is a pretty good outline of the plot. At that point I can then look at the entire story as a whole and figure out if the story works. Do I need to insert another scene? Do I need to take out one. How can I create more tension? What characters came to life and which ones didn't...etc.  When I get everything the way I like it, I'll go back and edit and fix everything.
Well, we'll see if this works.  I'm already on Chapter 12, so that's a good sign. This is the story of Luke Heaton, the town rogue and Cassandra Channing the town Miss Priss.  I haven't gotten the cover on this one yet, but if you've read Surrender the Heart, you'll know who Luke Heaton is. I've already gotten lots of comments on him. :-)

Anyway, have a great Weekend!! Spend some time thanking God for all He's done for you. !
Posted by MaryLu Tyndall at 4:00 AM