Please welcome author K. Dawn Byrd. Today I'm featuring her latest novel, Killing Time.  Although I haven't had a chance to read it yet, it sounds really good!  If you like what you see, be sure and click on the links below to order a copy.   Thanks K. Dawn! 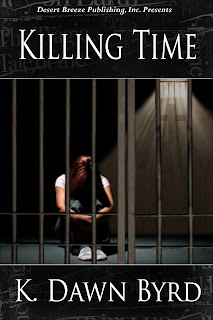 Mindy McLaurin, thinks it's the end of the world when she's incarcerated on trumped-up embezzlement charges. While in jail, she investigates the death of an inmate who allegedly died of an overdose. Mindy suspects foul play when her cellmate dies and she learns that both women had ingested the same drug. Mindy trusts no one, including Drew Stone, the handsome counselor she can’t stop thinking about. She faces many challenges, including constant interrogation by the Major and emotional abuse from the other inmates. Upon release, someone is stalking her and framing her for the murder. Can she prove to Counselor Stone that she’s innocent of all charges before she loses him forever?
Here's the video!
K. Dawn Byrd is an author of inspirational romance. Queen of Hearts, a WWII romantic suspense released in April and was Desert Breeze Publishing's bestselling novel for the month. Killing Time, a contemporary romantic suspense released August 1, also with Desert Breeze Publishing.
K. Dawn Byrd is an avid blogger and gives away several books per week on her blog at

www.kdawnbyrd.blogspot.com, most of which are signed by the authors. She's also the moderator of the popular facebook group, Christian Fiction Gathering.
When not reading or writing, K. Dawn Byrd enjoys spending time with her husband of 14 years, walking their dogs beside a gorgeous lake near her home, and plotting the next story waiting to be told.
Blog: www.kdawnbyrd.blogspot.com
Publisher:
http://stores.desertbreezepublishing.com/-strse-103/k-dawn-byrd-killing/Detail.bok (there will be links at this site to purchase from Amazon, Barnes and Noble, the Sony ebook store and others)
Posted by MaryLu Tyndall at 4:00 AM