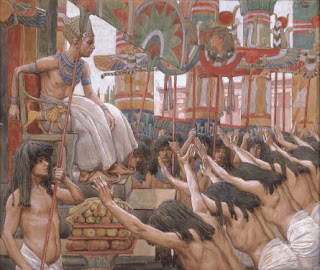 I LOVE the story of Joseph, always have. There is just so much to learn from it. I never tire of reading it and each time I do, God gives me some new way to look at it. Since the current series I'm working on now revolves around finding your God-given destiny, I read Joseph's story with a new pair of eyes last week.

You see God had a HUGE destiny for Joseph. Essentially he was to become the most powerful man of the known world at that time. Aside from the pharaoh of Egypt, there was no one more powerful. Imagine that. It would be like someone today being 2nd in command of a global government. But aside from the power, Joseph's destiny was to save his family from starvation and hence save the nation of Israel from complete annihilation. In addition Joseph would save the Egyptians and I'm sure other nations as well that came to him for help.

But isn't it true that ultimate power corrupts ultimately? Not many men can handle that kind of power without becoming self-serving, proud monsters. It's in our fallen human nature. God knew that. So, He had to put Joseph through what I like to call God's boot camp. Let's compare Joseph before and after he went through this boot camp.
In Genesis 37, we first meet Joseph. He's been pampered and favored his entire life by his father. Now, at age 17, he appears to be your typical spoiled teenage boy. He has dreams about his brothers and father bowing down to him. But instead of keeping them to himself or going to his father to discuss what God could be trying to tell him, Joseph tells his brothers his dreams, essentially flaunting their meaning before them.

Skip to Genesis 41. Here we see Joseph again. He's been sold into slavery by his brothers, falsely accused of rape by his owner's wife, then thrown into prison in Egypt.  It's been 13 long, miserable years of slavery and imprisonment, of cruel treatment and injustice. He is now 30 years old and brought before Pharaoh because Pharaoh had a dream that no one could interpret. So  he asks Joseph. Here's his reply:

"I cannot do it," Joseph replied to Pharaoh, "but God will give Pharaoh the answer he desires."

I don't know about you, but somewhere in Joseph's answer I see a man who's been humbled beneath the mighty hand of God. We don't see the young, arrogant, brash teenager anymore. We see a man who gives all the credit and power to God for everything.  And if you follow the story after Pharaoh makes Joseph 2nd in command, Joseph never again appears to be arrogant.  God had to get all of the pride and all of the self out of Joseph before he could reveal Joseph's destiny. Otherwise, Joseph wouldn't have been able to do it--at least not the way God needed him to rule.

I'm a firm believer that each one of us has a God-given destiny. Our God is a big God and His dreams for you are bigger than you could ever imagine. But He has to prepare you for that destiny. The more important the destiny, the longer and harder the boot camp! So, maybe you're wondering today what your purpose is in life. Why are you here? Have you asked God to show you your destiny? Have you told Him you're committed to fulfilling it? If so, maybe you're finding yourself in hard times, heartaches and betrayal and difficulties. Maybe you're wondering where God is? Has He forgotten you?  Can you imagine what Joseph was thinking for 13 years as a slave and a prisoner?   Maybe you're in God's boot camp!!  He needs to train you for your destiny. Don't give up like so many people do. If Joseph had given up on God during those 13 years, he would have completely missed his destiny. Maybe God would have found someone else, I don't know. But it wouldn't have been Joseph.  So, keep moving forward, keep trusting, keep believing, keep following God and never give up.  Take it from someone like me who, like Joseph, had to learn the hard way, but who ultimately found God's destiny for my life.
Posted by MaryLu Tyndall at 4:00 AM