What is in your hand could be your desinty! 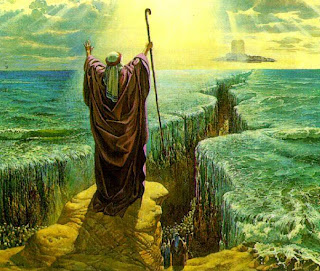 I'm reading through Exodus now and came across the story of Moses. LOVE MOSES!  Why? Because he's so Human. He's weak, he's not an eloquent speaker, he has no self-confidence. Basically he feels inadequate. So, when God approaches him through the burning bush and tells him to go free the Israelites from Egypt, Moses of course tells God He's got the wrong guy!
God proceeds to patiently tell Moses that He doesn't have the wrong guy, that God has a plan and it's going to unfold exactly according to His will.
Then at the beginning of Exodus 4, Moses still questions God by saying "But suppose they will not believe me or listen to my voice?
Then God says. "What is in your hand?"
And Moses answered "A rod."  It was his shepherding rod. Just a normal stick he used to guide the sheep. Nothing special.

So, I'm asking you today, what is in your hand? What are your God-given talents? Perhaps you have a beautiful singing voice or you can play an instrument. Maybe you can draw, paint, or sculpt? Maybe you have talent in math and analytical thinking. Perhaps you can write, fix things, maybe you have a gift of listening, caring, comforting. Maybe you're clinging to a problem, a heartache, a fear. The list goes on. Maybe you don't know if you have any talents at all. Maybe you're just an ordinary person who really doesn't think much of yourself.
I still ask you, What is in your hand?   Maybe its just you.

God then asked Moses to throw the stick down. Cast it at the foot of the throne of God. Basically God was asking for everything Moses had.
What happened?  God turned the stick into a snake and Moses ran.  God performed a miracle. He changed the rod. But it certainly wasn't into something  Moses expected or even wanted. Has this ever happened to you? You finally turn everything over to God (whether it be your talents, time, problems, heartaches, your life itself), but then things get worse. The bouquet of flowers you expected turns out to be a snake!

Maybe like Moses, you've thrown down your all to God. But now all you're seeing is snake. You're frightened, you're discouraged and you're tempted to run the other way.  God is done transforming your problem, your talent and now He wants to give it back to you. But it frightens you. God is asking too much. But you need to pick it up. You need to be obedient. I promise, if you do, the snake will transform into a powerful rod of God.

I'm so glad Moses picked up his stick. You see, he went on to use that rod (through the power of God) to perform great miracles in Egypt and free the Israelites from 400 years of bondage.  Moses had a destiny. And all he had to give God was the staff of a shepherd. But he gave it to Him. And God did things with that rod that blew Moses's mind.

So, what is in your hand?
Posted by MaryLu Tyndall at 4:00 AM