The Master's Wall by Sandi Rog

Hi all! Today I want to introduce to you a friend of mine, Sandi Rog, whose first book just released a few months ago. I had the privilege of reading this book for review. 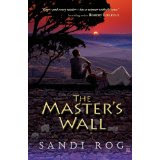 HE FIGHTS FOR HIS FREEDOM. SHE FIGHTS FOR HER LIFE. TOGETHER, THEY FIGHT FOR EACH OTHER. After watching Roman soldiers drag his parents away to their death, David, a young Hebrew, is sold and enslaved to serve at a villa outside of Rome. As David trains to become a skilled fighter, he works hard to please his master and hopes to earn his freedom. However, an opportunity to escape tempts him with its whispering call. Freedom beckons, but invisible chains hold him captive to the master's granddaughter, an innocent girl with a fiery spirit. David vows to protect Alethea from his master, the murderous patriarch, and contrives a daring plan—sacrifice his own life to save hers.

Here's my review
There are so few books set during this time period that I was very excited when the author sent me her book to review! The last books that I adored from this time were Francine Rivers' Mark of the Lion series. There's something so exciting about the start of Christianity during the decadent Roman culture, a culture that reminds me much of today. Anyway, rarely does a book transport me back in time so intensely that I lose track of time and have to shake Roman dust from my shoulders throughout the normal activities of my day. From the start, the Master's Wall jumps into action when young David's family is murdered and he is captured as a slave. The relationship between him and the young daughter of the wealthy Roman family in which he serves is one of the most endearing and transforming relationships I've seen in a book. Ms. Rog has truly captured the giddiness, spoiled, and innocent character of a young girl born to luxury as well as the stalwart, responsible and honorable character of David, a young man that will imprint his memory on your heart long after you read the final page. Through years of trials and struggles, both these young people grow up in such significant ways. The ultimate sacrifice of love is a theme that ties the characters and story together in a poignant example of Christ's love for us. This is a story you don't want to miss!


The reason I'm bringing this to your attention is that Sandi has recently been diagosed with cancer. Here's a note from her publisher:
From Daniel DeGarmo with DeWard Publishing
I'm sure all of you are aware of Sandi Rog's latest battle (with cancer - Type T-cell Lymphoma) that just began last week.

As you can imagine, she's devastated, especially considering the timing of all this as her first novel just released last Monday.
Well, considering we are a small publishing company and can pretty much do whatever we want, my business partner and I have agreed to donate an additional $1 per book to a Fund that I'll be setting up this week.
Just so no one thinks we are being shady about the whole deal, this is above and beyond the royalties that Sandi (and her agent) is already incurring with every book sold.
The purpose of this fund is to help out Sandi's family (husband and children) while she is laid up fighting for her life.
What I need from you is simply spread the word.  For every copy of "The Master's Wall" that is sold (including Kindle) we will donate $1 to this Fund.
I'll also be setting it up so that it can receive regular donations if anyone is interested in just helping out financially.
Hi, me again!. So, if you have a few extra bucks and would like to buy a great read, please consider buying Sandi's book at : Amazon
You can read more about Sandi and her books at  http://sandirog.com/index.html

Posted by MaryLu Tyndall at 3:36 PM