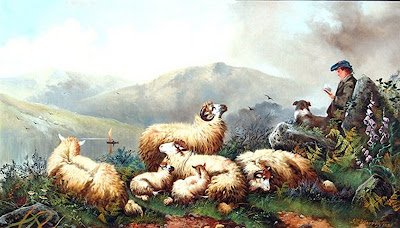 That night there were shepherds staying in the fields nearby, guarding their flocks of sheep.  Suddenly, an angel of the Lord appeared among them, and the radiance of the Lord’s glory surrounded them. They were terrified,  but the angel reassured them. “Don’t be afraid!” he said. “I bring you good news that will bring great joy to all people. The Savior—yes, the Messiah, the Lord—has been born today in Bethlehem, the city of David!  And you will recognize him by this sign: You will find a baby wrapped snugly in strips of cloth, lying in a manger.”
Suddenly, the angel was joined by a vast host of others—the armies of heaven—praising God and saying,
Glory to God in highest heaven,  and peace on earth to those with whom God is pleased.”  Luke 2:8-14

Do you ever wonder why God, the great glorious maker of the universe, chose to announce the birth of His only Son, the Redeemer of mankind and King of the Earth, to a group of smelly, dirty shepherds??

Think about it. Shepherds at that time (and probably still today) were considered the lowest of workers. You could probably compare them today to garbage men or street cleaners. It was a very smelly, unskilled job and it certainly didn't command any respect or a decent salary. Shepherds were typically loners who spent weeks and months out tending the sheep. There weren't dressed well, smelled horribly, and probably didn't have an education. Most likely they were not invited to any fancy parties or feasts.

Yet out of all the people around at the time of Jesus's birth, God chose to announce it ONLY to a group of Shepherds!!  To compare with today, imagine Jesus being born in a back alley of some filthy city and God  announcing it to a group of homeless people.  Don't you love it when God does stuff like this? It's so like HIM!

Anyway, there's a few reasons I believe God chose the shepherds and I think we all can learn some lessons from these guys. Especially if you're like me, and you struggle to hear from God.

First of all these shepherds were humble. They had to be. They had nothing to be proud about. They had no real money or possessions, no high positions among the people. God gives grace to the humble, but He resists the proud.

Secondly, and equally as important, shepherds weren't busy. The job of a shepherd is simply to watch the sheep. He spends his time guiding them to green pastures then allows them to graze. He makes sure they have fresh water nearby and that they are safe from predators. That's it! So, much of their work is spent alone in peace and quiet not doing much of anything. I imagine shepherds had a lot of time to gaze up at the stars and think about things. They pondered life and if they believed in God, they probably prayed a lot. I'm reminded of King David, who was a shepherd as a young boy. I believe it was on the shepherd's field that David learned to hear from God and to trust God. It was those years of quiet reflection on God's power and goodness that made David into, as God would later call him, "A man after My own heart."

So you see the shepherds were in the perfect position to actually hear the angel's announcement!  If God had sent angels to the priests in Jerusalem or the rulers in the palaces of Judea, do you think they would have heard them? I imagine, like most of us, the "Important" people were far too caught up in the business of life to actually hear from God.

This revelation really convicted me and really made me wonder how many times has God been talking to me and I haven't heard Him because I'm far too busy and caught up in the things of this world?  Maybe you've been asking God for an answer to something or you've been praying for something for a long time and God wants to answer you, to reassure you that He's working on it.. but every time He tries, your ears are closed.

I don't know about you, but I don't want to miss hearing from God. That would be the worst tragedy of my life. We certainly can't stop doing all the things we need to do, but perhaps we can rearrange our priorities a bit and spend some time just sitting and doing absolutely nothing but thinking of God and waiting for Him to speak. I'm really going to try and do this, and I urge you to set aside time each day for quiet reflection. My bet is that eventually God will show up Big time.

Who knows? We might be the ones to receive the announcement of His Second coming!
Posted by MaryLu Tyndall at 4:00 AM