But his fellow scouts said, We are not able to go up against the people of Canaan, for they are stronger than we are. So they brought the Israelites an evil report of the land which they had scouted out, saying, The land through which we went to spy it out is a land that devours its inhabitants. And all the people that we saw in it are men of great stature.There we saw the Nephilim, or giants, the sons of Anak, who come from the giants; and we were in our own sight as grasshoppers, and so we were in their sight.  Numbers 13: 31-33 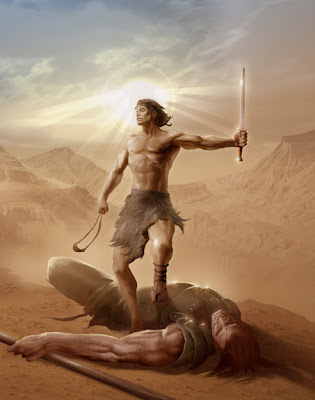 You know the story. Moses drags the million or so people of Israel from Egypt and brings them to the promised land. That beautiful land flowing with milk and honey that God promised to give to them. So, they send some scouts in to check things out. Out of the 12 scouts, only two, Joshua and Caleb, give a positive report. The other 10 respond as you read above.

Every time I read this, I always say to myself.. what a bunch of ninnies. How could they not believe God would help them defeat all their enemies? I mean, God already promised them over and over to give them the land and He'd already preformed countless miracles for them.  But then God put me in my place. He always does it so quietly and gently. He simply said, "Don't you do the same thing with your problems?"

Ouch. Yes. I do. All the time. Something bad happens. Or a situation develops that seems impossible. And I start to worry. Yes, I pray. I've at least grown that much in my walk. I pray. But then I worry! How is God going to do this? The problem is so big. It's a huge problem. There seems to be no way out.  Things like a lost loved one who is "seemingly" drifting further and further away from God,  a lost job with no prospects in sight, overwhelming financial problems, ill health with no cure, a broken relationship that seems irreparable.. whatever it is.. I worry.  I pray, let it go, but then I worry again. You see, I'm a chronic worrier. It's a family trait. And it's a very hard habit to break.

But then I read something in a devotional the other day.  "Whatever occupies your mind the most becomes your God. Worries, if indulged, become idols.

Yikes!  When I worry, I'm basically telling God like the ten scouts above, "The problem is too big. I don't think you can handle it!"   I'm giving the problem more credit and more power than God. In essence, I'm worshiping it. Boy, did that set me straight! Because I know there's nothing and no one more powerful than God. No situation, no relationship, no job, no lost lost loved one, no health problem, no heartache. Nothing. Nada. Zip

Remember how David went out to fight the giant, Goliath, when everyone else was shaking in their boots?
Don't worship the giants in your life!  In reality, you (with God) are the giant, and the giants are but grasshoppers in God's sight.
So, don't be a grasshopper. Be a giant killer!  Trust God. Cast your cares upon Him because He cares for you!
Posted by MaryLu Tyndall at 4:00 AM