Win a copy of Love Finds you in Tombstone, Arizona!!

By our special guest for the day, author Miralee Ferrel!  Welcome, Miralee! 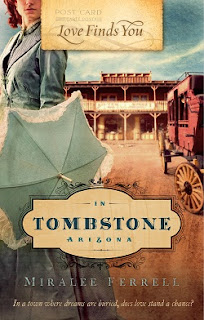 In a town where dreams are buried, does love stand a chance?

Love and second chances aren’t easy to come by in a town named Tombstone. When Christy Grey receives an urgent summons to Tombstone, Arizona, she reluctantly leaves her new life in California. The trip goes from bad to worse when four masked men hold up Christy’s stage. She finally arrives in Tombstone to find her mother ill and her brother trapped in a life of gambling. Desperate for money to support her family, will Christy bow to pressure from the local saloon owners and return to the life she thought she’d given up for good?

Nevada King has problems of his own. He’s been dodging bullets for years and wants nothing more than to settle down. But he’s on the run from outlaws bent on revenge, and the one woman who captures his interest recognizes him from the stagecoach holdup. Will Christy turn Nevada in to the authorities, or will the outlaws on his trail catch him first?
MaryLu here: I don't know about you, but that sounds like a great story!! I've read prior books of Miralee's and she's an awesome writer!
Here's a bit about Miralee

Miralee serves as president of the Portland, Oregon, chapter of American Christian Fiction Writers and belongs to a number of writer’s groups. She also speaks at women’s groups, libraries, and churches about her writing journey. When she started writing fiction Miralee believed that she’d always stay with women’s contemporary, but has since branched out to historical romance. Exploring family and marriage issues, The Other Daughter follows a family of four who receive a shock in the form of a 13-year-old girl who lands on their doorstep, claiming to be the daughter of the husband/father of the family—a girl they didn’t know existed. Finding Jeena features a character from the first book and explores socio-economic issues through a single woman’s sudden job-loss and ensuing struggle for survival.
She’s working on her third historical romance with Summerside Press in their Love Finds You series, set in Sundance, Wyoming (it releases this August). All the Love Finds You books are stand-alone novels, and take place in a real town in America. Miralee’s first three are set in 1877, Love Finds You in Last Chance, CA, 1902, Love Finds You in Bridal Veil, Oregon, and 1881, Love Finds You in Tombstone, AZ.  The first two have a suspense thread as well as romance and the third has a higher degree of action.
Miralee and her husband Allen have been married 37 yrs. They live on 11 acres in the beautiful Columbia River Gorge in southern Washington State, where they love to garden, play with their dogs, take walks, and go sailing. Miralee also rides her horse on the wooded trails near their home with her grown daughter who lives nearby.
Where can people find out more about you/connect with you online?
Facebook:   www.facebook.com/miralee
Web site:    www.miraleeferrell.com   (you can find pictures of our research trips to the historical locations, my journey into writing, family pics and info about my books here)
Blog:          www.miraleesdesk.blogspot.com  (I do occasional book give aways for my book & other authors, as well as random posts on daily life and my upcoming books)
Now, for the giveaway. In order to be entered to win a signed copy of Love finds You in Tombstone, Arizona, you must post a comment asking Miralee a question. Any question about her book, about her, about her writing process, her testimony.. whatever. Don't be shy!
I'll draw a name next Friday.
Posted by MaryLu Tyndall at 4:00 AM