Do we really know what Jesus endured on the Cross? 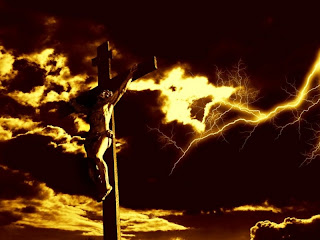 As we remember the day our Lord was crucified, I've been pondering everything He went through on our behalf.  Though the physical pain of being scourged and crucified is far worse than any of us can ever imagine, I'm not just speaking of that.  I'm talking about what took place in the Spiritual realm.

The Burden of Sin
Have you ever wondered how if felt to have ALL the sins of EVERY human past, present, and future placed on your shoulders?    Think of how you feel when you do something wrong. If you're like me, you feel terrible. You feel guilty. You condemn yourself and sometimes even dislike yourself. And that's just one tiny sin.

Jesus bore all of our sins and all the guilt and the shame and the condemnation that went with them. The burden must have been mind-boggling. He's the only one in the universe who could have borne it and not died spiritually.

Abandoned by God
Secondly, because all the sins of the world were dumped on Jesus, the Father could not look at Him.  The sweet fellowship that had existed between Father and Son for eons was severed. Leaving Jesus completely alone in His greatest time of need. If you've ever been betrayed by a spouse or a close friend and abandoned,  you have only a hint of the emotional agony Jesus suffered. Remember He was fully man as well as being fully God. He felt completely rejected and abandoned by the One Person who had always been there for Him and with Him. And now, as He hung there in excruciating pain dealing with all the guilt and condemnation of every sin of mankind, He found Himself all alone.

The Wrath of God
Not only did God have to abandon Jesus, but because Sin has a price, God had to pour out His wrath on His only Son. I encourage you to read Psalm 88, which is a Messianic Psalm which speaks of Christ's suffering on the cross. Here's a few verses:

You have laid me in the lowest pit, In darkness, in the depths.
Your wrath lies heavy upon me, And You have afflicted me with all Your waves
Your fierce wrath has gone over me; Your terrors have cut me off

After Jesus died, God  poured wave after wave of wrath upon Him. What this entailed, we may never know, but imagine for a moment the punishment that had to be inflicted for every sin ever committed. It had to be excruciating.I believe this along with God's abandonment is what upset so Jesus so much in the Garden of Gethsemane, not necessarily the physical pain.

Descent into Hell
There's much controversy over this but I believe Scripture confirms that Jesus descended into Hell after His death. While there, He suffered the wrath of God and then the Bible says He preached to the dead  who had disobeyed God and then freed the captives--the righteous dead--to go to heaven. He also took the keys to Hell, indicating his victory over Satan. (See Scriptures below)
Before Jesus' sacrifice, the righteous dead went to a place called Paradise which existed close to Hell. We know this from Jesus' story in Luke 16 of the rich man who called to Abraham across the void between the two places wanting a drink of water.  So, when Jesus told the thief on the cross that He'd see him in Paradise that same day, He was speaking of this underworld place.

For Christ also suffered once for sins, the just for the unjust, that He might bring us to God, being put to death in the flesh but made alive by the Spirit,  by whom also He went and preached to the spirits in prison, who formerly were disobedient, 1 Peter 3:18
For this reason the gospel was preached also to those who are dead, that they might be judged according to men in the flesh, but live according to God in the spirit. 1 Peter 4:5

But to each one of us grace was given according to the measure of Christ’s gift.  Therefore He says:
“ When He ascended on high,
He led captivity captive,
And gave gifts to men.”
Now this, “He ascended”—what does it mean but that He also first descended into the lower parts of the earth?  He who descended is also the One who ascended far above all the heavens, that He might fill all things. Ephesians 4

Do not be afraid; I am the First and the Last. I am He who lives, and was dead, and behold, I am alive forevermore. Amen. And I have the keys of Hades and of Death. Revelation 1:18


So I urge you to take some time today to think on these things. Read Psalm 22, Psalm 88 and Isaiah 53. And get on your knees and thank Jesus for all He went through just for you.
Posted by MaryLu Tyndall at 4:00 AM