The power of Praise! 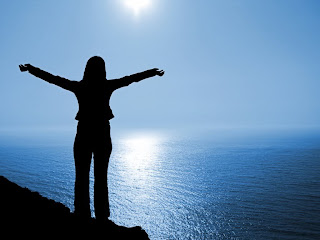 What is praise? The Dictionary defines it as the act of expressing admiration, approval or laudation. It is the offering of grateful hommage in words or song. Why do we praise God? More importantly, when do we praise God?

Do we praise Him only when things are going well? Do we praise Him only if He answers our prayers the way we want to? How easy is that? But what about when you get that dianosis of cancer or your husband leaves you or someone you loves die or you lose your job or you don't find a job for months. Do you praise God then?

Apparently, most of the crowds who followed Jesus here on earth were much like that. They praised God and followed Jesus because they either wanted him to heal them, feed them, or they wanted Him to overthrow the Roman rule and free them from enslavement.

Though Jesus did heal and feed many, He did not come to free them from earthly enslavement. He had something much more eternal in mind. Yet when they realized that, they turned on Him. They went from praising Him one day to crucifying Him the next.

I see so many Christians turn on God when He doesn't preform like they want him to. When He doesn't get them that job, save their marriage, get them that relationship, fulfill their dream. They get angry and claim God doesn't love them. That He's against them. It really saddens me.
Because if God doesn't answer your specific prayer the way you want, chances are He has something far greater in mind for you.

Why do we praise God? Because He is worth of praise. Plain and simple. We praise Him because that's what we were created to do. I used to think that God's demand for praise made Him sound rather narcisistic. But He doesn't need our praises to feed his ego. He longs for our praises because He knows that only by our worship of Him will we ever find fulfillment, peace, joy, and love. In other words, our praising God meets all of our needs in this life and the next. It's for our benefit, not His.


Don't believe me? Check out these Scriptures.
Our purpose
But you are a chosen generation, a royal priesthood, a holy nation, His own special people, that you may proclaim the praises of Him who called you out of darkness into His marvelous light; 1 Peter 2:9

Our salvation
I will call upon the LORD, who is worthy to be praised;So shall I be saved from my enemies. Psalm 22:4

Praise unleashes power and provision
And the Levites who were the singers, all those of Asaph and Heman and Jeduthun, with their sons and their brethren, stood at the east end of the altar, clothed in white linen, having cymbals, stringed instruments and harps, and with them one hundred and twenty priests sounding with trumpets—indeed it came to pass, when the trumpeters and singers were as one, to make one sound to be heard in praising and thanking the LORD, and when they lifted up their voice with the trumpets and cymbals and instruments of music, and praised the LORD, saying: “For He is good, For His mercy endures forever,” that the house, the house of the LORD, was filled with a cloud, so that the priests could not continue ministering because of the cloud; for the glory of the LORD filled the house of God.
2 Chron 5:12-14

Defeat your enemies
And when he had consulted with the people, he appointed those who should sing to the LORD, and who should praise the beauty of holiness, as they went out before the army and were saying: “Praise the LORD, For His mercy endures forever.”  Now when they began to sing and to praise, the LORD set ambushes against the people of Ammon, Moab, and Mount Seir, who had come against Judah; and they were defeated.   2 Chron 20:21-22

But You are holy,  Enthroned in the praises of Israel. Our fathers trusted in You; They trusted, and You delivered them. Psalm 22:3-4

Praise is an act of will
I will bless the LORD at all times; His praise shall continually be in my mouth Psalm 34:1

Enter into God's presence
I will Enter into His gates with thanksgiving,And into His courts with praise.  Psalm 100:4

Praise is a weapon
Let the high praises of God be in their mouth,And a two-edged sword in their hand, Psalm 149:6

Cure for depression
The garment of praise for the spirit of heaviness; Isaiah 61:3
Posted by MaryLu Tyndall at 4:00 AM