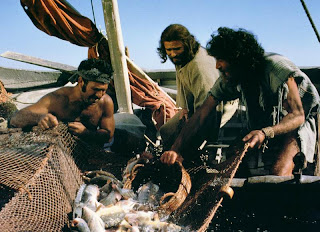 Has God told you something, or promised you something, either directly or through His Word, but you feel like you just don't have enough faith to believe it will come to pass?   To make matters worse, you've probably heard a dozen or so sermons on the topic telling you that if you don't have enough faith, God can't operate. You remember the myriad stories from Jesus's life where he praised someone's faith and then healed them completely or granted them their request. And the times when he walked away, unable to do any miracles because of unbelief.

Funny how the enemy will bring up all those "faith" stories and pound you over the head with them until you feel like you're the biggest Christian loser out there. A complete failure. I mean, why would God help someone like you?

I was reading the story in Luke 5 last week where Jesus first meets Peter. He uses Peter's boat to preach to the crowd. Afterward, He tells Peter to row out and cast his net into the deep. Now, Peter had been up all night fishing and not caught a thing. He knew full well that you can't catch fish during the broad daylight. What Jesus was asking him to do was crazy.  Yet, Peter only hesitated a second before he said "Nevertheless, at your Word, I will let down the net."

As it turns out, when Peter did so, they caught so many fish, the nets nearly broke. Now, I ask you, did Peter have faith that he would catch fish? No. He told Jesus as much. Then why did the Lord bless him with so many fish?

I believe it was 2 things: Obedience and Reverence.  I don't know what Peter believed about Jesus at this point, but he must have believed Jesus was either a prophet or some Holy man, perhaps even the Messiah. Because of that belief, he feared Jesus as one would fear God, in a reverencial, awestruck way. And because of that, Peter obeyed.

There are so many other examples of this in Scripture, but I urge you to search for those moments when Jesus healed or delivered. Some may have had the faith to believe Jesus would grant their request, others may not have. But I assure you all of them worshiped Him and obeyed Him first.

What are your thoughts of Jesus, of God? Do you revere Him, worship Him? Are you living in obedience? If so, then that is true faith. It is what astounds the angels as they watch us. That we simple humans can worship a God we've never seen and not only that, obey His Word. That is what faith is all about.

So, don't let the enemy tell you that you have no faith or weak faith. The fact that he's even attacking you with those thoughts prove that the opposite is true. Faith is not a feeling. Believe that God Loves you and that He is a good God, and a rewarder of those who seek Him. In Peter's case, that was enough.

So shove out into the deep, cast out your net, and see if God doesn't fill it with fish!
Posted by MaryLu Tyndall at 4:00 AM