My trip to the Naval Academy

As you all know I spent 4 days in Annapolis Maryland and also in DC for the United States Naval Academy Graduation. We had a grand time.  Our first night we ate dinner at this restaurant on the Severn River (which feeds out into the Chesapeake. You may remember the Chesapeake from Surrender the Night. It's the massive waterway that the British blockaded.)  Anyway, I can't tell you how wonderful it was to sit there, eat crab cake, and smell the salty ocean air. Right across the river stands the Academy. 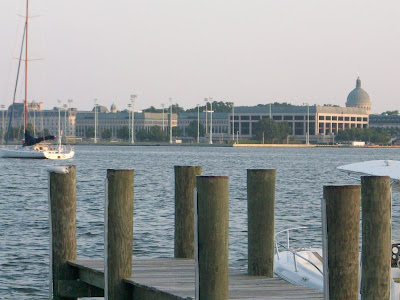 Below is a picture of me, my hubby and our daughter,Christine 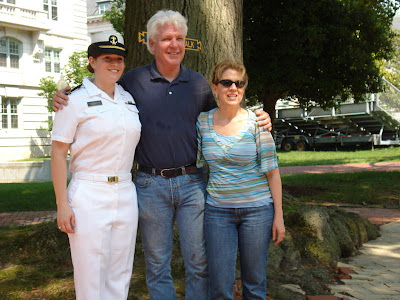 ﻿﻿ ﻿﻿
We spent the next day walking around the Academy. My mother and my husband's parents joined us. Plus Christine, of course. 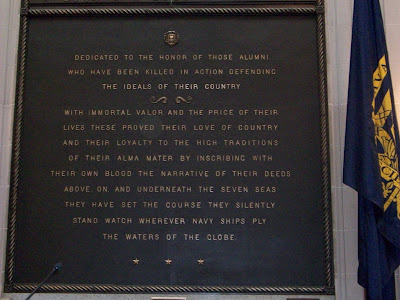 Above is a plaque in memorial hall which is inside Bancroft where they list all the men and women who graduated from the Academy who died in the service of their country. My grandfather's name is there. I hope you can read it.

﻿﻿
﻿﻿﻿ ﻿﻿﻿
We also visited Washington DC!  Just for a day. It was very crowded, but we managed to see part of the Smithsonian-the American History part, visit the Lincoln Memorial, and the WWII Memorial. Large groups of motorcyles (Mostly Harleys) drove through the streets with American flags flapping from their masts due to Memorial Day. It was very patriotic!﻿﻿﻿ ﻿﻿﻿ 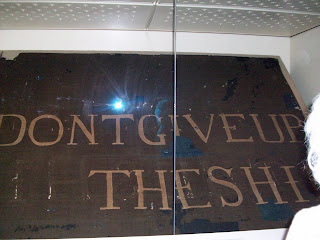 Tradition has it that Captain James Lawrence said these heroic words after being mortally wounded in the engagement between his ship, the U.S. frigate Chesapeake, and HMS Shannon on 1 June 1813. As the wounded Lawrence was carried below, he ordered "Tell the men to fire faster! Don't give up the ship!"
Above is a picture of an old flag partially destroyed in a ship battle.
Anyway, as you can see we had a marvelous time. It was also a momentous time. A time to honor those who serve our country and to celebrate this great nation! I'm so proud of my Step-Daughter, Christine!
Posted by MaryLu Tyndall at 4:00 AM