News Flash: Satan isn't after you! 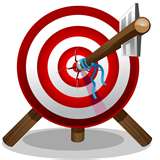 Nop. Believe it or not we are not Satan's target. Yes he hates us because we are made in the image of God. Yes, he'd like to kill and destroy us. But not because of us. It's because of God's Word living within us. He doesn't bother people who don't know God, who don't know His Word. It's only because we have God's Word in us (through the indwelling of the Holy Spirit) that Satan attacks.

Remember the garden of Eden? How did Satan go after Eve?  "Did God say.....?"  He questioned the Word of God. He did the same thing when he tempted Jesus in the wilderness. If Jesus had done what Satan asked: throw himself off a building, bow to Satan, he would have been essentially saying I don't trust God to do what He says He's going to do. He would have been denying God's Word.

What about you? How does Satan attack the Word in you. Perhaps by telling you you're worthless, telling you you'll never find that special someone, your children will never return to the Lord, you'll never do anything important, you're weird and weak, and nobody really loves you.  All attacking what God says about you.

What is the solution? How can we withstand these attacks. The answer is simple. It is to have a heart of good soil. A soil where weeds and thorns cannot grow. A soil fertilized by God. His presence, His Word, His Love. If you've allowed weeds to grow in your garden, repent and pluck them out. Then just love the Father, the Lord Jesus, and your neighbor as yourself. Seek first the kingdom and His righteousness, and all these things will be added to you. Let Him add, don't try to get in your own strength. Allow your heavenly dad to be good to you. He wants to!

And don't worry about that old guy with horns. There's nothing he can do to harm good soil!
Posted by MaryLu Tyndall at 4:00 AM