The god of this world

Read the words of Dietrich Bonhoeffer, a pastor in Germany who was executed for his stand against Hitler

"In a world where success is the measure and justification of all things, the figure of Him who was sentenced and crucified remains a stranger and is at best the object of pity. The world will allow itself to be subdued only by success. It is not ideas or opinions which decide, but deeds. Success alone justifies wrongs done. . .With a frankness and off-handedness which no other earthly power could permit itself, history appeals in its own cause to the dictum that the end justifies the means. . .The figure of the Crucified invalidates all thought which takes success for its standard." 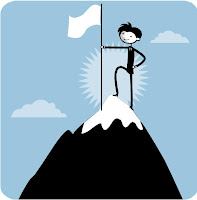 How do you define success? Think about your answer for a moment.
I bet if we took to the streets and asked random people, we'd get answers such as:

Being an author who is exposed to public viewpoints and whose success is measured in books sales and fame, I've been thinking a lot about this lately.  It seems to me that this present culture worships success more than anything. It has become our new god, the thing everybody strives for and craves. It is the ultiimate narcisistic, self-loving, self-worshiping god. It says my success is all that matters. Success is what gives me value in the world and in the eyes of the world. And people who don't achieve the world's definition of success end up being depressed, angry, despondent and feel like they are worthless.

It's so easy to get caught up in the cyclone of success, isn't it? Because, let's face it, we do need to work hard and be successful in order to support our families and care for our loved ones. But, like everything good God created, Satan loves to pervert and twist it and make it into something that destroys man instead of motivates him.

For all that is in the world--the lust of the flesh, craving for sensual gratification, and the lust of the eyes greedy longings of the mind, and the pride of life, assurance in one's own resources or in the stability of earthly things,-these do not come from the Father but are from the world. 1 John 2

What is success to God?
And the world passes away and disappears. . .but he who does the will of God and carries out His purposes in his life abides forever. 1 John 2:17
And what does the Lord require of you but to do justly, and to love kindness and mercy, and to humble yourself and walk humbly with your God? Micah 6:8

So, my question to you is this: Are you willing to be looked at by the world as a loser? As unsuccessful, as a nobody? Because at the end of  your life on earth when you stand before God, the only thing that will matter is that you loved God and obeyed Him.
But many that are first shall be last; and the last shall be first
Posted by MaryLu Tyndall at 4:00 AM