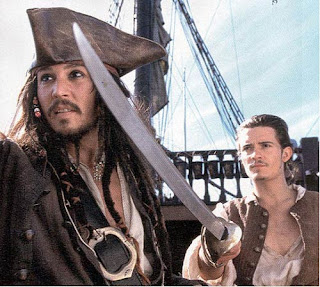 Kirsten!!!!  Congratulations, Kirsten!
All of ye did fairly, says I, but I must say, if ye mean to be pirates, ye'll be needin' to bonin' up on yer pirate slang else no decent pirate will be able to understand ye and visa versa.
Only one of ye got ALL the answers correct. An' that be Lauri Pierce. Lauri, a fair pirate ye appear to be! Me thinks ye deserve a special prize. Hmmm.

Okay here be the answers:

Why listen to the lad! He's naught but a saucy malapert ruffler.

A. A perky, ignorant person
B. A disrespectful, mouthy man
C. A discontented sailor
D. A pirate who's sick all the time

What's this? All niminy-piminy affectations and , save for lace ruffles, all sable black from trucks to keelson
A. Pirate whose in touch with his feminine side
B. Sailor who is constantly whining like a baby
C. Man who loves to dance constantly
D. A hypocrite

The pewling spawn, how I despise them!
A. A sailor who sings off key
B. A pirate whose sunburnt skin constantly peels
C. A whining, whimpering fool
D. A pirate who stinks

So whose fault is it anyway that ye've ended up a rumpot deckhand which takes orders from pirates.
A. A drunk
B. A pirate with a beer belly
C. A sailor who is so fat, he can barely move
D. Beef-witted man

A mite too fast these light-footed wenchers be for the likes of an ol' swag-bellied pirate such as I
A. overhanging belly
B. A decorative scarf tied about the waist
C. A pirate with his pockets full of fruit
D. A pirate whose belly is tied to the anchor chain

You're supposed to be King's men, not bard slabs
A. A person who wears garish or ridiculous clothing
B. Lazy good for nothings
C. Frightened stiff
D. court jesters

Pieces of Eight! Pieces of Eight! Who hailed ye, ye old bumboat!
A. Bt full of ninnies
B. A peddler selling goods to pirates
C. Something that is shabby or inadequate
D. Prison ship for pirates

Ah, run fer yer lives. The curse to the main be here!
A. A superstition bringing a bad omen
B. A man or thing that threatens to break the mainmast
C. A pirate song that is terribly off-key
D. A difficult person. A pain in the you know what

I hope you all had fun with our talk like a pirate day contest. And I also hope you had a chance to check out Jamie Carrie's blog and contest as well!   Regardless of whether you won, I hope you'll check out her new release Pirate of my Heart, and my newly released Pirate series as well. (Legacy of the King's Pirates), as well as our other books.

God bless you all! Have a great weekend!  May God grant ye fair winds an' a clear horizon!!!
Posted by MaryLu Tyndall at 8:12 AM