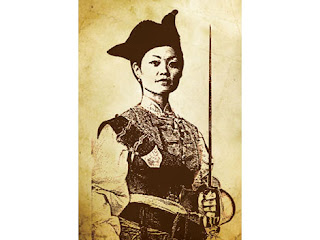 Along the coastal waters of the South China Sea, many people lived and worked on junks rather than reside on the land. These boats were crammed with family members from the youngest infant to the oldest grandparent. The women worked alongside the men, fishing, trading, and pirating. One such woman was Cheng I Sao (also known as Ching Yih Saou, Ching Shih, and Lady Ch’ing). A former prostitute who married a sea robber, she and her husband organized a confederation of pirates that eventually numbered over 50,000. They ransomed captives and their ships while extorting payment from people who lived along the coast to not attack their villages.


When her husband died in 1807, Cheng I Sao assumed command of the pirates. She appointed Chang Pao, her husband’s adopted son, leader of the Red Fleet, the most powerful of the six fleets that made up the pirate confederation. Soon after they became lovers.

According to the code of conduct that spelled out the rules and rewards under which the Chinese sailed, each pirate received two plundered pieces for every ten captured. Since Cheng I Sao did not wish to live hand to mouth, the rest of the plunder was stored in warehouses to ensure that the squadrons were always armed and ready. The code of conduct also spelled out punishments harsher than those administered to buccaneers of the previous century in the West Indies. Any who disobeyed an order or stole from the common plunder were beheaded. Deserters lost their ears. The first time pirates concealed booty they were flogged. The second time they died. If they raped a female captive, they were executed. If the woman agreed to the sex, the man was beheaded while weights were tied to the woman’s legs and she was tossed overboard.

Fleets sent by the Chinese Imperial Navy to destroy the pirates were themselves destroyed. By 1808 they had lost 63 vessels to the pirates. One captured officer was nailed to the ship’s deck, then beaten until he vomited blood. Later, he was taken ashore and butchered. Rather than risk capture Admiral Kwo Lang committed suicide. Coastal villages created militias to repel the raids, but the pirates exacted horrific revenge on those who defied them. In 1809, they beheaded 80 men of the Sanshan village and abducted their women and children, holding them for ransom or selling them into slavery. Seamen of captured merchant ships could join the ranks of the pirates or suffer excruciating death.

When the Imperial government solicited assistance from British and Portuguese warships, Cheng I Sao decided to retire from piracy. In April 1810, she negotiated terms of an amnesty with the Governor General of Canton. Less than 400 pirates suffered any form of punishment: 60 banished for two years, 151 exiled, and 126 executed. The remaining 17,318 pirates surrendered their weapons and 226 junks, but retained their plunder. Those who wished to join the army could, including her lover, Chang Pao, who received the rank of lieutenant and command of a private fleet of 20 junks.

Cheng I Sao and Chang Pao settled in Fukien. They eventually married and had a son. When Chang, who had been promoted to colonel, died in 1822 at the age of 36, Cheng I Sao returned to Canton. A wealthy woman, she ran a gambling house and possibly a ring of smugglers, but otherwise led a quiet life until her death in 1844. She was 69 years old.

For more information on Cheng and other famous pirates, visit http://www.cindyvallar.com/chengsao.html
Posted by MaryLu Tyndall at 4:00 AM