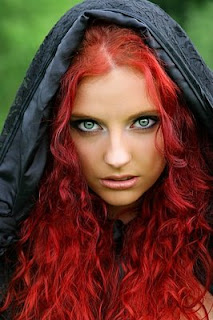 Jacquotte Delahaye (17th century), was a French pirate, or Buccaneer, and together with Anne Dieu-Le-Veut one of very few female buccaneers.
She was active in the 1660s, came from Haiti, her father was French and her mother Haitian. She is described as a great beauty who became a pirate after her father was killed. It is rumored that her mother died in childbirth. Her brother suffered from mild retardation and was left in her care after her father's death.

To escape her pursuers, she faked her own death and took on an alias, living as a man for many years. Upon returning she became known as "back from the dead red" because of her striking red hair.
Posted by MaryLu Tyndall at 4:00 AM