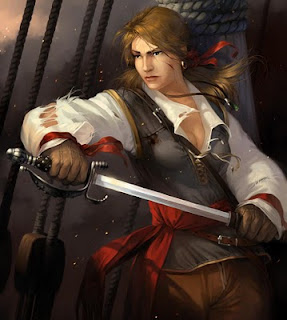 Anne Dieu-le-Veut was born around 1650 in France. Her birth-given name was Marianne Dieu-le Veut, which means “Anne Gods-Want-It”. This was true, because whenever she wanted something, her will was so strong, it was as if the gods wanted it too. Not much else is known about her.


Later on, she married a buccaneer named Pierre Length. In 1683, Anne’s husband was killed by another famous buccaneer, named Laurens de Graff in a bar fight. Anne challenged Laurens to duel to avenge her husband’s death (and Laurens also possibly insulted her). But Laurens would not fight a woman. So, heproposed to her on the spot, in admiration of her courage (They never married, because Laurens already had a wife. However, he had abandoned her many years before, but from that point on, they were seen as man and wife).

Anne shared Laurens work, and commanded the ship in the same fashion as Anne Bonny and Calico Jack. Unlike Mary Read, Anne did not disguise herself as a man. This aroused a lot of attention and mostly fascination. Usually, women were considered bad luck on a ship. But Anne was considered a bringer of good luck.
Anne’s most famous tale begins when Anne and Laurens were attacking a Spanish ship. A canon ball killed Laurens, so Anne took his place as captain. Eventually, Anne and her crew were captured.Taken first to Vera Cruz in Mexico, and then to Cartagena in Colombia, both of which were cities earlier sacked by Laurens, to be judged, Anne’s fame was so great that when the French Marin Secretary of Pontchartrain heard of this, he wrote to Louis XIV of France and asked him to make the king of Spain intervene. Anne was then freed as a special service between kings, and she was never heard of again. Anne’s daughter (she was said to have had two, born in the early 1690s) was said to have lived in Haiti, where she became known for having performed a duel with a man. Like mother, like daughter!

I hope you've enjoyed our journey back into history as we have looked at women who defied all convention and set sail upon the glorious seas!
Posted by MaryLu Tyndall at 4:00 AM