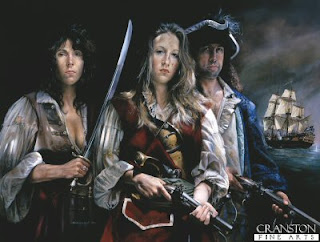 Mary Read was born at Plymouth, England, about 1690. Her mother's husband was a sea-faring man who left on a long voyage and was never heard from again. He'd left his wife pregnant and she gave birth to a sickly male child who died soon after the illegitimate birth of his half-sister, Mary. The mother waited years for her husband to return and when her money ran out, she took Mary to London to appeal to her mother-in-law for financial help. She knew this old woman disliked girls, so she dressed Mary in boy's clothes and made her pretend to be her son. The mother-in-law was fooled and promised a crown a week to help support them. Mary continued to masquerade as a boy for many years, even after the old woman died and the financial aid ended.

Then a teenager, Mary was hired out as a footboy to a French woman. But according to history, "here she did not live long, for growing bold and strong, and having also a roving mind, she entered herself on board a man-of-war, where she served some time; then quitted it." Still disguised as a male, she enlisted in a foot regiment in Flanders and later a horse regiment, serving in both with distinction. She fell in love with a fellow soldier, disclosed her true sex, and began dressing as a female. After their marriage, she and her husband became innkeepers, owning the Three Horseshoes near the castle of Breda in Holland. Unfortunately, he died young and her fortunes soon dwindled.

She knew that life in the 1700s was much easier as a man than as a woman, so she reverted back to men's clothing and started her life over, this time going to sea on a Dutch merchant ship heading to the Caribbean. On one voyage, the ship was commandeered by English pirates with whom she sailed and fought until they accepted the King's pardon in 1718 and began operating as privateers. Soon afterwards, their ship was overtaken by Captain Jack Rackham's Vanity and, bored of the legitimate life, she again turned pirate. Anne Bonney was already part of Rackham's crew, and she and Mary quickly discovered each other's cross-dressing secret and became close friends. Despite her tough exterior, Mary found a lover on board and is said to have saved his life by protecting him from a threatened duel. She picked a fight with his opponent first and, with deadly use of her sword and pistol, ended his life before he could harm her husband-to-be.

Mary is said to have died of a violent fever in the Spanish Town prison in 1721, before the birth of her child. Other reports say she feigned death and was sneaked out of the prison under a shroud.
Posted by MaryLu Tyndall at 4:00 AM