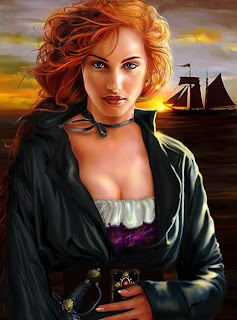 There came to me…a most famous feminine sea captain….  This was a notorious woman in all the coasts of Ireland. – Sir Henry Sidney, Lord Deputy of Ireland 1576

While much has changed in the more than four hundred years since Grace O'Malley ruled the West Coast of Ireland, the rugged, windswept natural beauty and ever-changing skies, gaunt brown mountains rising from the mist still distinguish the lands of the O'Malleys, Burkes and O'Flahertys.

In this land of happy wars and sad love songs lived the most famous of the O'Malleys, a strong female warrior, as fierce and powerful as any man. Much more than just a pirate, this Gaelic princess was a remarkable leader respected not only by her own people but by the English rulers that were their adversaries.

From her earliest days, she rejected the role of the sixteenth century woman, instead embracing the life on the sea with the fleet of O'Malley trading ships. Ambitious and fiercely independent, her exploits eventually became known through all of Ireland and England. Finally, the English could no longer ignore her and sent a fleet to stop her predatory sieges, but had to retreat when Grace attacked. Finally, Grace met with Queen Elizabeth and reached an alliance that benefited them both.

For more information, check out this website:  http://www.rootsweb.ancestry.com/~nwa/grace.html
Posted by MaryLu Tyndall at 4:00 AM