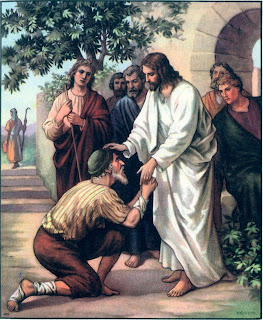 Now it happened as He went to Jerusalem that He passed through the midst of Samaria and Galilee. Then as He entered a certain village, there met Him ten men who were lepers, who stood afar off. And they lifted up their voices and said, “Jesus, Master, have mercy on us!”
So when He saw them, He said to them, “Go, show yourselves to the priests.” And so it was that as they went, they were cleansed.
And one of them, when he saw that he was healed, returned, and with a loud voice glorified God, and fell down on his face at His feet, giving Him thanks. And he was a Samaritan.
So Jesus answered and said, “Were there not ten cleansed? But where are the nine? Were there not any found who returned to give glory to God except this foreigner?” And He said to him, “Arise, go your way. Your faith has made you well.”

I came across this during one of my readings. You can find the story in Luke 17:11-19.  Just a few paragraphs describing the event, yet for those men, a life changing experience! Of course any encounter with Jesus, either back then or now, is life changing!

The story goes that as Jesus was passing through a certain village, ten lepers screamed to him to heal them. I find it interesting that instead of laying hands on them or telling them okay, you're healed! Jesus simply told them to go show themselves to the priests.  By Jewish law anyone with a contagious disease had to go to the priest in order to be pronounced clean. So, in essence, Jesus gave them a command.

They didn't complain and question him and get angry (at least that we know). Instead they obeyed.. and they were healed as they headed toward the temple.  I think Jesus was testing them, as He often tests us. We want Him to do something for us.. but are we willing to obey Him? How committed to Him are we? Will we abandon Him after we get what we want?

Yet, the story continues. One of the men came back to Jesus, fell at his feet, worshiped Him and thanked Him. Only one. And Jesus says something really odd. After pointing out that the other nine men had not returned to thank Him, He tells the man that his faith has made him well. What faith? He obeyed Jesus. He thanked Him and worshiped Him, but I didn't see any blatant acts of faith.

That's when I realized that thanksgiving and worshp are faith. They can't exist without faith. In fact, they are the deepest expression of faith. The man understood who Jesus was and what He had done for Him. And he expressed that by thanking Him, by worshiping Jesus. If the man hadn't believed Jesus was the one who healed him, if he hadn't believed Jesus was God, he wouldn't have bothered to return and express his faith by bowing at his feet.

What happened to the other nine men? Scripture doesn't tell us. But I have a feeling that maybe, just maybe, they got leprosy again. Not because Jesus didn't want them to be healed or He wasn't powerful enough to heal them, but because they had no faith.

Do you sometimes feel like your faith is weak? Is your mind often flooded with doubts? Have you been asking God for something for a long time and it just never seems to happen? Me too! It's normal. It's part of the Christian walk.  We all struggle in this way. But, I'm here to tell you from my own first hand experience, that if you maintain a constant attitude of thankfulness, if you spend more time during your day thanking God than asking Him for something, not only will your faith grow, but start to see different ways God is working in your life and in your cirumstances!

Practice thankfullness. As you walk through your day, talk to God. Thank Him for the sunshine or the rain. Thank Him for the flowers, the cool breeze, good food, a phone call from a friend, a compliment someone pays you...whatever is good in your life, thank Him for it.  It pleases Him greatly and it will change your entire outlook!
Posted by MaryLu Tyndall at 4:00 AM