In Honor of Talk Like a Pirate day on Monday, Sept 19th, I'll be posting about a different female pirate every day from today through next Friday!  I thought ye may want to know about all the famous women in history who chose piracy over life as a conventional lady.

Also, be sure and come back on Monday!!!  We'll be having a Talk Like a Pirate Day contest. Test yer skills in pirate speak and enter to have a chance to win a free pirate book. Together with author, Jamie Carrie, who is hosting another contest on Facebook that you'll want to check out! we'll be giving away two copies each of our own books.
Now onto Anne Bonney! 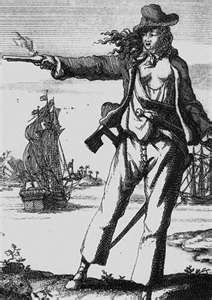 Anne Bonney, born in County Cork, Ireland, was the illegitimate daughter of lawyer William Cormac and his housemaid. They immigrated to America after Anne's birth in the late 1600s and settled on a plantation near Charleston, South Carolina. A headstrong young woman "with a fierce and courageous temper," she eloped with a young ne'er-do-well, James Bonney, against her father's wishes. James took her to a pirates' lair in New Providence in the Bahamas, but in 1718, when Bahamian Governor Woodes Rogers offered the King's pardon to any pirate, James turned informant. Anne was disgusted with his cowardice and soon after, she met and fell in love with the swaggering pirate Captain Jack Rackham. Disguising herself as a male, she began sailing with him on his sloop Vanity, with its famous skull-and-crossed-daggers flag, preying on Spanish treasure ships off Cuba and Hispaniola. It is reported that she became pregnant by Jack and retired from piracy only long enough to have her baby and leave it with friends in Cuba before rejoining him and her adventurous life on the high seas.

No record of Anne's execution has ever been found. Some say that her wealthy father bought her release after the birth of her child and she settled down to a quiet family life on a small Caribbean island. Others believe that she lived out her life in the south of England, owning a tavern where she regaled the locals with tales of her exploits.
Posted by MaryLu Tyndall at 4:00 AM