Ways God Speaks to us - Part 3 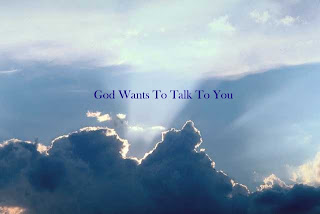 In the past two posts, I mentioned 4 ways that I've noticed God speaks to us and I gave you examples of the first three. If you missed them, please check the archives.  My hope is that many of you have begun to realize that God has been speaking to you for years and perhaps you didn't know it. If you did know it, I hope I've given you affirmation of God's constant presence and involvement in your life.

Here are the four ways. (Not an exhaustive list. Just my experience)

Today we will deal with the fourth way God speaks to us and the most rare. Directly. I'm including dreams and visions in this category because through them God is speaking to us one on one.  Here are some examples from Scripture. Notice how specific the communication is:

Saul's conversion on the road to Damascus in Acts 9 where Jesus Himself calls to Saul saying "Saul, Saul, why are you persecuting me?" Saul answers and he and Jesus tells him to go into the city and wait.

Ananias, the same chapter, received specific communication from Jesus in a vision telling him to go to a certain house and lay hands on Saul to receive his sight.

Peter sees a vision while on the housetop in which Jesus tells him specifically that "What God has cleansed, you must not call common." Jesus was instructing Peter to accept Gentile believers into the fold.

Philip was instructed by an angel to travel down a certain road where he saw a chariot and a eunuch in it who was reading Isaiah. Then the Spirit said to Philip, “Go near and overtake this chariot.”  So he did and was able to explain the Scriptures to this man and he believed!

Acts 18: Now the Lord spoke to Paul in the night by a vision, “Do not be afraid, but speak, and do not keep silent;  for I am with you, and no one will attack you to hurt you; for I have many people in this city.” And he continued there a year and six months, teaching the word of God among them.

Acts 23: But the following night the Lord stood by him and said, “Be of good cheer, Paul; for as you have testified for Me in Jerusalem, so you must also bear witness at Rome.”

So, you see that when the Lord speaks to us directly, it's normally to give us specific directions or tell us specifically what to do or what will happen.  Isn't that amazing? Some people would say.. yea, that was in Acts. Things like that don't happen today? Really?

I'll give you an example from my own experience. Years ago, I was stuck in a dead-end job that I absolutely hated. I had been a Christian for a few years and I was begging God to deliver me. I was sure He had something else for me to do with my life. I had spent years searching different job opportunities.. school options.. and came up empty. Finally at the end of my prayer walk one morning before work, I simply lifted my hands and gave it all up. I completely surrendered to God and told Him that I'd stay where I was.. that I'd scrub toilets for a living if that's what He wanted. I felt such peace after that and a couple yards later as I was nearly home I heard this voice. It wasn't audible. It came from deep within me. And it spoke with authority and yet it was full of joy. The voice said. "I've got something for you to do that will blow your socks off!"  It literally said that. I laughed at first. But then I wondered where it came from because I wasn't thinking about jobs or my future anymore, I was just praying. So, I told God that if that was Him, Thank-you and I went on my way. At the time I wasn't writing anything. I hadn't written in years.. but two years later, I got my first publishing contract and they've been coming ever since.  I now know that was God's voice I heard.

Since then I've heard Him speak directly to me several times. Usually in instruction or answering a question or just telling me He loves me. Sometimes it's a warning. People tell me it's just my imagination. Satan tries to tell me I'm crazy, but I know the Lord's voice.

And when he brings out his own sheep, he goes before them; and the sheep follow him, for they know his voice. John 10:4

How do you know it's the Lord and not you or Satan?  Here's some criteria that may help you.

It's clear and specific.
It's directed at you
It brings peace
It is authoritative
It seems to come out of nowhere when you least expect it.
It never defies anything in Scripture.


So, what about you? I'd love to hear your stories!!  Have you heard from God?
Posted by MaryLu Tyndall at 4:00 AM