Dancing a jig for Jesus! 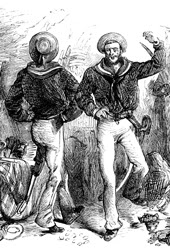 Being a sailor was a lonely life. Men would spend weeks, often months at sea, only anchoring in ports long enough to get supplies and be on their way again.  When they weren't on duty, they found ways to entertain themselves during long voyages. They would drink and play cards, write letters to their sweethearts, but more often then not, they would sing and dance. Usually there was at least one person on board who could play an instrument. In good weather, sailors would gather around on the main deck, and sing along to the music and dance with each other!

Dancing throughout the ages has been an expression of joy, happiness, and romance. In native cultures, dancing could also be an expression of virility or power over one's enemies or a way a please a god.  There are many references in the Bible to dancing. God's people often danced out of joy, awe, and worship of God.

King David was no exception. When he brought the ark of the covenant back into Jerusalem, he led the joyful procession by dancing before the Lord.

Then David danced before the LORD with all his might; and David was wearing a linen ephod.  So David and all the house of Israel brought up the ark of the LORD with shouting and with the sound of the trumpet  2 Samuel 6:14-15

Here was the King of Israel, the most mighty, powerful man in the entire kingdom and he had stripped down to a simple undergarment and was dancing like a crazy man. I love this about David. He wasn't into status or position. He didn't care what anyone thought of him! He just wanted to glorify God.

Can we say the same thing? Are we willing to be made a fool for Jesus?  Or do we shrink back from expressing our joy, our worship of God when we are among people who wouldn't understand? People who might laugh at us or make fun of us. Why is it acceptable to paint your face blue, go to a football game half naked and shout and carry on for your team, but when a Christian raises his hands in worship and shouts hallelujah or--shock of all shockers--he or she dances in joy, why does the world snicker and belittle that person?

And more importantly, why should we care?

Now as the ark of the LORD came into the City of David, Michal, Saul’s daughter, looked through a window and saw King David leaping and whirling before the LORD; and she despised him in her heart. . . .And Michal the daughter of Saul came out to meet David, and said, “How glorious was the king of Israel today, uncovering himself today in the eyes of the maids of his servants, as one of the base fellows shamelessly uncovers himself!”

David's wife, Michal, was embarrassed of her husband. She thought that as a king, he should act more dignified and regal. She was worried that her maids would sneer at him and think less of him as a king and a man.  I've met many people like this, haven't you? It's all about appearances, their shiny cars, fancy houses, what so and so thinks of them, how many prestigious social clubs they belong to, and of course how many important people they know. You want to know something? God doesn't care one fig for any of those things.

David retorted to Michal, “I was dancing before the Lord, who chose me above your father and all his family! He appointed me as the leader of Israel, the people of the Lord, so I celebrate before the Lord.  Yes, and I am willing to look even more foolish than this, even to be humiliated in my own eyes!  2 Samuel 6:21-22


Take that, Michal!  David loved God so much, he could have cared less what people thought of him. He intended to dance and sing and worship God with all his might even if the entire kingdom thought he was a fool!

I wish we all had the mind of David!  And not the mind of Michal. God was not pleased with her attitude for she put man's approval above God's. So Michal, the daughter of Saul, remained childless throughout her entire life.  2 Samuel 6:23
So shove aside your inhibitions! Sweep away your need for man's approval. Focus on God and God alone and on how wonderful and loving and good He is, and then dance a jig for Jesus!  I guarantee He will be pleased!
Posted by MaryLu Tyndall at 4:00 AM