Don't end up in the bilge! 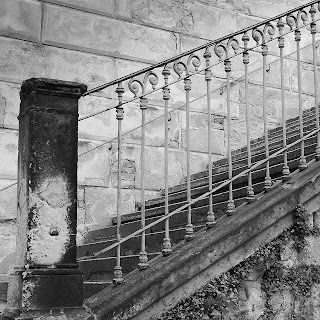 The bilge is located at the very bottom of the ship, down in the hold, where dirty, smelly, sludge collects. Believe me, even hardened sailors didn't want to go down into that smelly pit, only inhabited by cargo and rats. Plus, without a lantern, it was so dark you couldn't see your fingers in front of your face.

But so often in life, we make one small bad decision after another, one small step down the ladder to the hold, and before we know it we are up to our knees in bildge water, filth, rats and darkness.

Don't think it can happen to you? Well, it happened to King David, a man 'after God's own heart'. He took seven crucial steps, made seven crucial decisions and everyone of them led him into the darkness.

It happened in the spring of the year, at the time when kings go out to battle, that David sent Joab and his servants with him, and all Israel; and they destroyed the people of Ammon and besieged Rabbah. But David remained at Jerusalem. 2 Samuel 11:1


First step down on the ladder.
When David should have been leading his army, he chose to stay at home.

Then it happened one evening that David arose from his bed and walked on the roof of the king’s house. And from the roof he saw a woman bathing, and the woman was very beautiful to behold.

2nd step down
As soon as David saw the naked woman, he should have turned his eyes away. But he didn't. He must have stared at her for quite awhile to notice how beautiful she was.

Then David sent messengers, and took her; and she came to him, and he lay with her

3rd Step down
David acted on his desire. He could have done nothing, but he chose to call the woman to his bed.

And the woman conceived; so she sent and told David, and said, “I am with child.”
So, David calls her husband from battle. (Okay, this sounds promising)
When Uriah had come to him, David asked how Joab was doing, and how the people were doing, and how the war prospered. And David said to Uriah, “Go down to your house and wash your feet.” So Uriah departed from the king’s house

4th Step down
David had a chance to tell Uriah the truth. To confess what he'd done. Instead, he tried to trick Uriah into going home and sleeping with his wife.

But Uriah was a man of integrity. He didn't go home, stating that it would be wrong for him to have the comforts of a wife and bed when his fellow soldiers were sleeping on the battlefield.

Now when David called him, he ate and drank before him; and he made him drunk. And at evening he went out to lie on his bed with the servants of his lord, but he did not go down to his house.


5th step down
Realizing what a great guy Uriah was, David had another chance here to tell the truth. Instead, he chose to try and get Uriah drunk so he'd go home to his wife.

In the morning it happened that David wrote a letter to Joab and sent it by the hand of Uriah. 15 And he wrote in the letter, saying, “Set Uriah in the forefront of the hottest battle, and retreat from him, that he may be struck down and die.”

6th step down
David could stop all this madness now by choosing to confess his sin and accept the consequences. Instead he sent a letter that would condemn an innocent man to death.

So, of course, Uriah dies in battle.

Then David said to the messenger, “Thus you shall say to Joab: ‘Do not let this thing displease you, for the sword devours one as well as another

Last step down
After David has murdered Uriah, he tries to cover it up by basically telling the commander of his army that these things happen in war. No big deal.

Now, David is in the dark bilge. It isn't a pleasant place. The son Bathsheeba born him soon dies. For the rest of David's life there is turmoil in his family. One of his sons rapes his sister, another son murders his brother and then gathers an army against David. It is a huge family mess, a mess that could have all been avoided had David just paused on any one of those steps and made a different choice.

So, be careful. Don't let your guard down for a minute. Every tiny desicion you make will either lead you up to the sunshine on deck or down into the hold. Pause, think, pray, ask for God's strength and wisdom. And he will lead up toward the Son.