Tis a Writer's Life for Me! 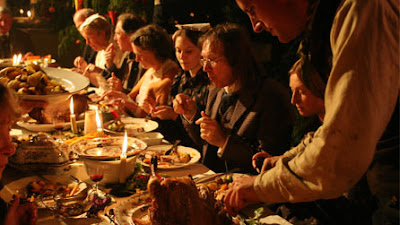 For example in this one scene, I'm in my hero's head and he's giving a speech to the entire crew and all the passengers assembled on deck. That's great. But while he's talking, I need to transform myself into a little invisible sprite and hop from head to head in my secondary characters trying to figure out what they are thinking about my hero's speech and what they would say and how they would behave in response. When you've got a dozen or so people to figure out, the task can be daunting!

But not only must I figure out what they are going to say or do, but I must work their response somehow into the character arc of my hero and heroine. You see, when you write, no scene, no dialogue should be without a specific purpose. It should either move the plot along, or it should change the main characters.  So every time a secondary character speaks or acts, it should not only fit their personality but it should have an impact on the main character's journey. Let's look at an example from my book, Surrender the Dawn.  One of the hardest scenes for me to write is a dinner scene where you have mulitple people sitting around a table.

There are 5 characters in this scene. Each one's actions and dialogue reveal to the reader a bit more about them. There is also a lot of tension in this scene between these characters.  Just from this short excerpt, how do you think the plot is forwarded? How are relationships moved forward or backward?  What role does Mr. Crane play? What about Cassandra's mother?

Grabbing a plate of what appeared to be fried fish, she handed it to Luke. “Yes, indeed, sir. We have Mr. Heaton to thank for that. As it turns out, he is quite the privateer.”
Luke smiled inwardly as he grabbed the platter and slid a portion onto his plate.

Mr. Crane sipped his wine. “Isn’t it just a game of luck, Mr. Heaton, this privateering?” He said without looking at Luke. “I mean to say. It’s quite a gamble that you’ll even encounter a British vessel, let alone one that you can catch and defeat in battle.”

Luke opened his mouth to reply but the man continued, “And then she must have a bellyful of cargo to sell to make her worthwhile prey.” He plucked a biscuit from a tray and passed the plate to Cassandra. “Yes, indeed, it seems but a game of chance.”

“As it turns out, Mr. Crane. I’m quite good at gambling.” Luke winked at Darlene as she passed him a bowl of greens. The girl giggled.

“A worthless pastime,” Mrs. Channing interjected. “For charlatans and idlers.”

“I quite agree.” Mr. Crane huffed. “Your reputation, Mr. Heaton, does you no credit. And like all gamblers, I’ll wager your luck will run out in time.”

“Then you would wish ill-luck on me as well, Mr. Crane.” Cassandra seethed. “For my success is tied with Mr. Heaton’s.”

Luke raised a brow at her spiteful tone.

“Not at all, my dear.” Alarm rang in Mr. Crane’s voice as if he realized his error. “I merely speak in philosophical generalities. No harm done, Mr. Heaton, eh?”

Fury surged through Luke’s veins while he forced a calm smile upon his lips. All eyes shot to him as if expecting an angry outburst. “I’m flattered that you have spent so much time pondering my past and my reputation, sir. Perhaps you should attend to your own.”
Cassandra smiled and gazed down at her plate.

Mr. Crane stretched his neck. “I’ll have you know, sir, that my reputation is without blemish.”

Mrs. Channing helped herself to the meat pie. “Indeed, Mr. Crane. You need not concern yourself in that regard. All of Baltimore can attest to your good name.” She gave a nervous chuckle, no doubt anxious to change the topic. Her glance took in the table. “Do forgive the lack of proper dining service. I’m afraid we haven’t had time to redeem our china and silverware.”

“Ah, no bother. No bother at all, my dear lady.” Mr. Crane lifted a spoonful of fish to his mouth then recoiled slightly as he tasted it.

“But, wouldn’t you say, Mr. Crane,” Cassandra pressed, “that one’s reputation is never etched in stone? That it is subject to improvement over time?”

Amazed at her defense of him, Luke sought out her eyes, but she kept them locked upon Crane.

Mr. Crane gazed at her with the patronizing look of a teacher with a child. “A rarity, Miss Channing, for it is my belief that one’s character”—he cast a condescending glance at Luke—“or lack thereof, is forged in one’s youth.”

“I do not agree, sir.” Cassandra pursed her pink lips. “And I’ll ask you not to further insult Mr. Heaton. He is my guest.”

Luke sipped his wine, enjoying the exchange. Enjoying that this fascinating woman stood up for him. Perhaps he should thank Mr. Crane for being such a priggy bumblehead.

There's much more to this scene that would make a clearer picture, but you get the point.  Tune in next week when I'll discuss how I develop my character'c arc and how secondary characters feed into that..