In every good book and movie the main characters go through some kind of change. They grow, they learn, they move from a bad place, position, or attitude in their lives to a better place. They transform into a better person. If a character doesn't progess or change in the story, I guarantee you the story will be flat.

So how do you make a character change? You push him or to their very limits. You put them in terrifying, even deadly situations! And then see how they behave. This is the fun part!!!  At first you character will probably not do so well. They will fall back into their old familiar ways, but if you keep pressing them and if you give them something worthy of changing for, by the end of the book, he or she will be a new person!

To accomplish this, I use a spiritual/character arc for my main character. Basically, I draw a huge arc on my chalk board that looks like an upside down bowl.  At the beginning, I list my characters qualities. Here's the list I made for Luke Heaton, the hero in my last book 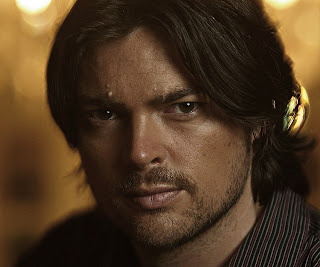 Man, Luke is quite a mess!!
Then on the right side of my arc, I list where I want my hero to end up.


Trying to change this guy, now, that's a tall order?
But here comes the hard part. I need to list different events and people from the beginning of the arc all the way to the end that will help move Luke slowly from point A to point B.

This is where both characters and plot come into play. I list all my characters, both main and secondary and decide if there's something they could say or do that would influence Luke in the right directiong. I write all those things down. Things like:

Cassandra makes him want to be a better man so he can win her love
Reverend Drummond talks to him about God's destiny
Biron Abbot discusses spiritual matters to him and provides a good example of a Godly man
Noah Brenin, Lukes Best friend is a role model for who Luke wants to become like.
Joseph Keene is an example of who Luke doesn't want to become like in the future

Now, I consider what events can occur to change Luke

Falling in love with Cassandra
When his enemy Tripp ruins Luke's life, he sees how his gambling and arrogance caused this man's hatred
When Luke's brother is in danger, he recognizes he is responsible,.
When Cassandra is destitute Luke gives up his own money--something he's never done before
When Luke reaches the bottom and is thrown in prison and everyone he loves is in danger, he finally humbles himself to the point of looking up to God.
When the angel delivers him, Luke realizes God has been with him the entire time

There are more, of course.. but once you have a good list you can start lining them up on the arc. Remember to make them believable and be sure to incorporate all your different secondary characters, making use of their unique roles we discussed last week.

And lastly, if you're writing a romance, you need to create another arc for the heroine as well, using the same principals as above.  The heroine's arc can be completely different from the heroes. In fact, it's preferable that she have a different set of lessons to learn than the hero and even more perferable if some of those lessons conflicted with the heroes. The more conflict the better!.

This is the last lesson I'm doing on writing. Next week, I'm starting a general posting on Friday about anything that comes to mind. Just a way for us to interact at the end of the week.
Posted by MaryLu Tyndall at 4:00 AM